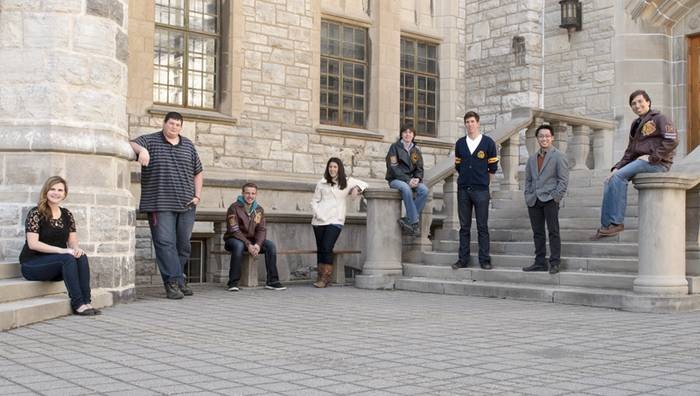 Naomi Rosenfeld, ArtSci ‘13 at Queens University was one of eight recipients of the Agnes Benidickson Tricolour Award this year. The award is given to students who contribute to the University in non-academic and non-athletic capacities.

Rosenfeld’s extracurricular activities range from fitness instructor at the ARC to vice-president of Queen’s Hillel. She’s been involved in the organization of Holocaust Education Week, is a peer learning assistant, and has played on an intramural dodgeball team. She was also part of this year’s production of Down There.

“Everyone is so involved. It’s something so special about Queens,” she said. “It’s the true embodiment of the Queen’s spirit that there are eight winners this year.”

About Naomi:
Naomi’s passion for helping others and raising awareness about injustices has in part defined her distinguished contributions to the Queen’s community. Her work with Holocaust Education Week transformed it into an engaging event that brought in exhibits, survivors, and a partnership with Queen’s STAND Against International Genocide to expand the program’s reach within the Queen’s community. Under her direction, Holocaust Education Week successfully incorporated Queen’s students from all backgrounds and provided them a comprehensive education about the Holocaust. In every role that she has taken on at Queen’s Hillelfrom first year representative to Chair of Holocaust Education Week, Naomi has shown creativity, attention to detail, and commitment to the work she put forward. Her leadership has inspired others to become more creative in programming events for Queen’s Hillel and more proactive in engaging a large variety of students. She has often been described as an excellent mentor to her peers both through her role in the Hillel and as a Peer Learning Assistant. As an integral member of the Peer Learning Assistant team, her friendly professionalism has helped her establish trustworthy relationships with students, supervisors, and team members. She is often admired for her integrity and deep caring for others. In addition to her work with the Hillel and Peer Learning Assistants, she dedicates her time to an extensive number of groups including volunteering at Martha’s Table, performing in the musical production Down There, and teaching cardio kickboxing and step aerobics at the Athletics and Recreation Centre. The Queen’s community is fortunate to have been impacted by Naomi’s charismatic, creative, and caring personality. Her dedication to helping others is a true representation of the spirit of Queen’s University.

Visit the links below to learn more.