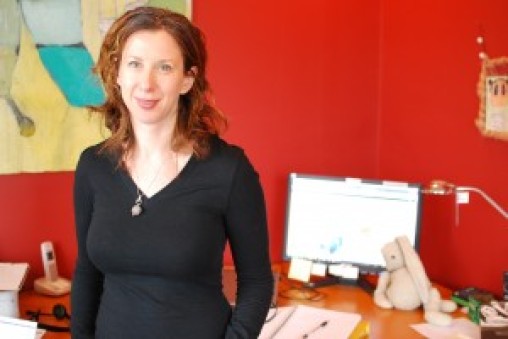 How to be Jewish in Thunder Bay:  Susan Goldberg & the Thunder Bay Youth Program

When Susan Goldberg and her partner moved north from Toronto nine years ago, the biggest challenge they faced was not just the colder weather in Thunder Bay.  As their family grew, they struggled to find ways to introduce their two sons to Jewish culture and community. ”We couldn’t just fly to Toronto for every holiday,” says Susan,  “although we did do that for a while.”

With a population just over 100,000, Thunder Bay is home to a very small Jewish community.  Initially, Susan met some other young Jewish families through the university community. Eventually, they joined the local synagogue, Shaarey Shomayim.  “Interestingly, several other couples, where one or both partners was Jewish, moved here around the same time as we did, and then we all had children. So the next logical step was to establish a Hebrew school.”

More recently, the congregation has begun to search for ways to allow its member, of all ages, to regularly socialize and celebrate their Judaism at the same time. With funding from Jewish Federations of Canada–UIA, Susan took on the role of coordinating a monthly social event. Since September, she has coordinated multiple community events that have connected families throughout the city.

In cooperation with local institutions and organizations, events have included holiday celebrations for Chanukah, Purim, and Tu Bishvat. An evening of Israeli dancing that provided child care services allowed parents to get footloose knowing their kids were being entertained as well.

Outreach to Jewish students at Lakehead University continues to attract young people to community events. In conjunction with Lakehead University, a public lecture on the topic of post-colonial Jewish literature in South Asia is scheduled for May. Spring will also bring a Havdallah bonfire in the Spirit Garden at the recently renovated Prince Arthur’s Landing on Lake Superior.

“There’s no one answer as to how to be Jewish in Thunder Bay,” says Goldberg. “But I think it’s key to program for the community you have, not the community you wish you had or that you used to have. We find creative ways to host events, given the size of the community and the limited resources available. But we’re making it happen, and I can say with certainty that my sons are growing up with an understanding of themselves as part of a wider Jewish community.”

*Jewish Federations of Canada –UIA provides funding for the Local Youth Program Coordinator position. For more information on bringing this partnership to your community,  and on other regional community programs, contact Daniel Stern at dstern@jfcuia.org.