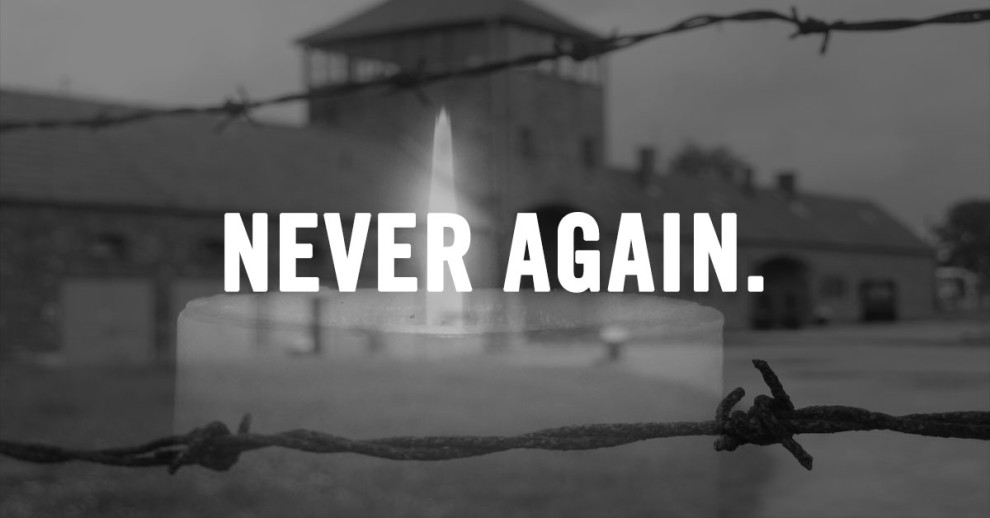 
"There may be times when we are powerless to prevent injustice, but there must never be a time when we fail to protest." - Elie Wiesel

On this day, since 1953, Jewish communities across the world have officially commemorated the loss of 6,000,000 Jews - among them 1,500,00 children  - whose lives were taken by the Nazis is officially recognized.

In Canada, Yom HaShoah is marked by ceremonies and events at local Jewish institutions. In Poland, over 700 Canadians walk in the footsteps of the 1.1 million Jews executed at Auschwitz-Birkenau alongside thousands of people from around the world on the March of the Living.  In Israel, an official state ceremony Yad Vashem Memorial in Jerusalem marks the start of  Yom HaShoah.  At 10:00 a.m., an air raid siren sounds throughout the country and Israelis observe two minutes of solemn reflection.

This annual silent tribute to the memory of those who perished proclaims to the world that not only have the Jewish people survived, but we have thrived. This year, the March of the Living is honouring the memory of Elie Wiesel, Auschwitz survivor, author and Nobel Prize Laureate.

Yom Hashoah is a valuable opportunity to acknowledge the innate spirit, resilience and strength of the Jewish people, who throughout history have defied attempts at destruction.

On Yom Hashoah, we also honour the brave survivors who came to Canada to rebuild their lives. We are fortunate to have many still with us as active community members. They have made significant contributions to the Canadian Jewish community by educating generations of Canadians about the Holocaust. Every time they tell their story, they keep the memory of destroyed communities and families alive.

Keeping memory alive is also achieved through the March of the Living Archive Project. Footage is being recorded as March of the Living accompanying survivors share their stories with the students. These testimonies will be archived and available in perpetuity for future generations of students.  Visit  www.molarchiveproject.com

On this somber day that honours victims of the Holocaust, it is also appropriate  to reflect on personal blessings and to think about the people that have enhanced our lives. Yom Hashoah is a day to express our respect for the past, our gratitude for today and our hope for tomorrow.