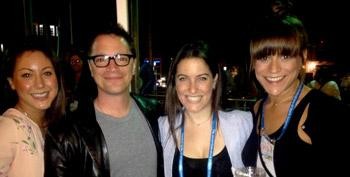 TribeFest 2014 brought the chevrah together

~~From left, Samantha Banks, actor Joshua Malina, Kortney Shapiro, and Ariel Fainer celebrate TribeFest at the “Rollin’ on the River” event hosted by JNOLA on the Steamboat Natchez.

What’s better than taking a vacation with approximately 1,300 of your closest friends from across North America to learn about community, leadership and tikun olam while simultaneously celebrating the festive holiday of Purim in one of the most culturally stimulating and vibrant cities state-side?

Last month, I had the opportunity to attend TribeFest in New Orleans. Together with other young professionals and community leaders, many of whom came from the 156 Jewish federations who make up the Jewish Federations of North America (JFNA) family. Dubbed “the” young adult Jewish youth gathering of the year, TribeFest boasted a lineup of prominent speakers, interactive sessions, and memorable events.

During TribeFest, I was afforded the opportunity to participate in the Leadership Development Institute program (LDI), a companion program to TribeFest for young leaders ages 22 to 45 seeking to advance both their outreach skills and networking opportunities. In a room of more than 100 young professionals, we learned the power of storytelling and relationship-building. It was enlightening to hear from other federations who provided us with guidance as to how they confront challenges when trying to get other young professionals involved and passionate about giving back and becoming a part of community.

One of my favourite parts of TribeFest’s programming each year is the Main Stage plenary session. Main Stage brings the entire contingency together in a main hall, where they are treated to various speakers and performers. Upon hearing the opening words of the Canadian national anthem, our group of 35 loud Canucks stood on our chairs and sang with passion as the entire room turned to see us draped in our best Canadiana. I felt proud to be a part of this experience with my fellow Canadians, many of whom were attending for the first time.

TribeFest 2014 co-chairs David Kline and Emma Samuels told the crowd what drove them to become involved in community.

Samuels, speaking with The CJN following the conference about her time planning and organizing TribeFest said, “there was never a dull moment while collaborating [the] countless speakers, programs, organizations and local communities.”

“The enthusiasm of almost 1,300 young adult Jews at TribeFest in New Orleans was infectious,” she said.

“Tribefest created a platform to connect participants to their Jewish values and importantly, [to] one another, which will help reinvigorate our communities and strengthen our ties to our culture and heritage.”

Other notable speakers included Scandal and West Wing star Joshua Malina, who relayed to the crowd, with a biting sense of humour, his personal experiences connecting his family to Judaism and how playing an active role his community has positively impacted his life.

I approached Malina during the boat cruise to chat and take a photo. Regardless of his high-profile position, in that moment we were both just two young Jewish leaders enjoying an evening of shmoozing and celebration.

Also addressing the conference was Avital Zeisler, who trained at the National Ballet School of Canada and has since overcome a traumatic assault. She is now the founder of the Soteria Method, an a self-defence and fitness system geared to women. She captivated the audience as she spoke openly about her experiences, and her rise to becoming an acclaimed self-defence instructor in New York.

She finished her speech with five simple, yet powerful words, “Go and create your life.”

We had the opportunity to really see New Orleans throughout the conference. From walking the famous Bourbon Street, winding our way through the French Quarter, to enjoying powdered beignets at the celebrated Café Du Monde after a night out on Frenchmen Street in the Faubourg Marigny neighbourhood, seeing the city’s acclaimed live jazz and contemporary performers. We spent Sunday evening with the entire TribeFest contingency on the Natchez Riverboat, organized by JNOLA. As we danced atop the Mississippi, it was an incredible feeling to have the opportunity to celebrate together under a star-splattered southern sky.

From my own experience having attended TribeFest before, I can honestly say that I have never felt so at home among such a large group of passionate people who wear their hearts, communities and ruach on their sleeves.

I am already looking forward to the next conference, the JFNA’s annual General Assembly, which will be taking place in Washington, D.C. this year. As for the next TribeFest, I can’t wait to once again meet with my international chevrah, who at this point have become more than that – they have become family. One day I hope to organize such an incredible event.

In the meantime, I will continue learning and meeting other passionate leaders who make this community who we are today: proud, diverse and not afraid to get up and inspire one another to make a change, one tribe at a time.