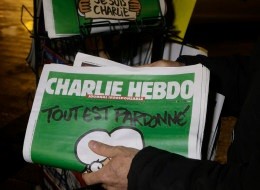 As we mourn new rounds of innocents murdered at the hands of Islamist extremists, there is a natural temptation to fall into despair and paralysis. Those sentiments, however, cannot be indulged. We must recognize that we are in the midst of a war of ideas against an enemy willing to use any means necessary -- including murdering police officers and journalists -- to advance a cynical political agenda, the objective of which is to end our way of life.

Of course, as a Jew, I am concerned and saddened that part of last week's savagery unfolded in a Jewish neighborhood at a Jewish supermarket. But antisemitism echoes far beyond the Jewish community. History has taught us, time and again, that when Jews are targeted, attacks on the rest of the population are sure to follow. Jews are the proverbial 'canary in the coalmine' when it comes to extremism.

If our core values -- democracy, tolerance, pluralism -- are to prevail, moderates must act before the extreme right and the extreme left hijack the discourse. We must move quickly and decisively to prevent such atrocities from recurring, beginning with four critical steps.

The first is to dispense with political correctness so we can identify the crux of the problem: violent, radical Islamism -- the adherents of which use fear and violence as tools to achieve political gains. We are told repeatedly that it is not the Muslim faith but rather a minority of extremists within the Muslim community who are responsible for these atrocities. I believe that.

That said, however small or large the minority in question, it is clearly sizeable enough to pose an enormous challenge for authorities and a serious threat to the safety, well-being, and values of the Western world. We know it is composed of radical Islamist ideologues who broadcast to a global audience of millions, a significant cohort of Islamist sympathizers and supporters within Western Islamic communities, and literally thousands of Western jihadists active throughout the Middle East and -- increasingly -- Europe and North America. Those who reflexively minimize the scale of the problem only serve to obstruct efforts to resolve it.

Second, we must refuse to award a terrorist's veto when it comes to our fundamental freedoms. In a democracy, elected governments and independent courts determine the bounds of freedom of expression, not extremists with assault weapons. Charlie Hebdo's editorial decisions are worthy of debate, but terrorists cannot be allowed to set the terms of the discussion through fear. While some have suggested a ban on depictions of religious figures, this would not only represent bad policy, it would be a posthumous victory for the terrorists who attacked Charlie Hebdo.

Third, police in France and throughout Europe should refuse to surrender a single inch of territory to extremists. Police presence is required for intelligence gathering in the districts in which extremists live, network, openly proclaim their agenda and quietly accumulate weapons.

Authorities must also find effective ways to transform intelligence into action. Police should have the tools they need to actively monitor and detain those who loudly promote violent insurrection. In France, Charlie Hebdo attacker Cherif Kouachi had already been convicted of intending to engage in terrorist activities. According to his lawyer, Kouachi had encouraged other would-be terrorists to attack Jewish targets. Kouachi himself told French media that he had met with and was financed by the infamous Anwar al Awlaki, a senior figure in Al-Qaeda in Yemen.

It is alarming that someone with a clear trail of activities was able to obtain weapons, plan and carry out an attack without advance intervention by police. Why was he allowed to move about freely? We impose limits on the movements of pedophiles and drunk drivers, why not on Islamist extremists who openly advocate violence?

Fourth and lastly, Western leaders must abandon any illusion that liberal democratic values are self-evident. We must do more to counter jihadist ideology by educating the next generation in the ideals that make our countries safe, prosperous, and free. Democratic states should include more than national history and civics in the core curricula of their schools; emphasis should be placed on the principles of freedom, civility, equality, and diversity. School programs should likewise expose the disastrous alternatives to democracy by shining a light on those undemocratic countries where human rights are abused.

It should not take another terrorist attack for governments, including our own, to adopt the points outlined above. A solidarity campaign of Twitter hashtags is ultimately meaningless if we are not prepared to actually defend those among us -- police officers, journalists, innocent civilians, and yes, Jews -- who are on the front line in the assault on liberal democracy.