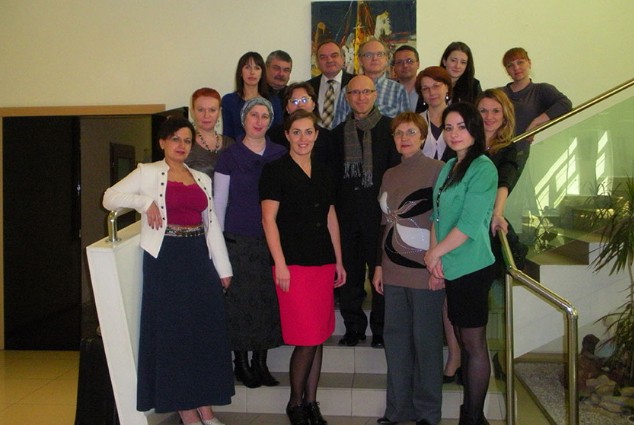 My first visit to Odessa – the “pearl of the Black Sea” – was in the 1990s after the Soviet Union’s collapse. The city, even after decades of communist rule, remained a historical gem with its Potemkin Steps and ornate Opera House. It was also home to a significant Jewish population that has earned a distinct reputation for its special brand of pride.

Having survived the Nazis and the Soviets, these Jews were eager to reclaim their identity and embrace the challenges of a post-communist existence. And they had a legacy of Jewish greats to draw from: Isaac Babel, Ze’ev Jabotinsky, Boris Goldstein, and even the Olympic medal-winning swimmer Lenny Krayzelburg.

In the more than twenty years that have passed since I first visited, the community has blossomed. A flagship of post-Soviet Jewish life and of JDC’s investment in that goal, the city today is home to several JCCs, synagogues, Jewish cultural and educational opportunities, leadership training programs, nursery schools, and many other outlets for Jewish life. And yet a common thread has persisted: economic fluctuations and political crises that have contributed to poverty and dire need among the elderly, families, and score of other Jews.

Those factors – including news this week of a downgrade in Ukraine’s credit rating, fears of energy stoppages, and unrest – came to a climax over the last five months in Ukraine, and I got to witness this firsthand when I visited Odessa last week. I spent my time there speaking to local Jews who expressed their concerns for the future, their increasing needs, and, above all, their appreciation for our emergency response during their time of need.

And I also spent time speaking to JDC’s extraordinary staff. They share the concerns of their neighbors, and are apprehensive about what lies ahead. The difference for them, however, is that they don’t just shoulder individual burdens, they also shoulder the growing concerns of those in their care. And it is that special dynamic – the caregiver caring for others even as they themselves are impacted by the crisis – that is profoundly felt in Ukraine today.

I heard from our brave staff about deep personal stress, friends facing hopelessness, and family members torn apart by changing borders. But there were two passing remarks that stood out for me above the rest: “Every night I go to bed and I am praying to wake up the next morning and just realize everything that has happened today was a bad dream” and “I am not supposed to show that I am under stress.”

Inexorably linked, the two sentiments demonstrate both the enormous stress that our staff experience and their self-imposed professional mandate to keep a stiff upper lip, even when the circumstances are dire. And this is increased manyfold when you consider that JDC staff – and the employees of programs and facilities we support, including social and home care workers – operate out of four offices and thirty-two Hesed social welfare centers that serve more than one thousand locations around Ukraine. They therefore need outlets to vent, to constructively channel their feelings, and ensure they can continue to carry out the avodat hakodesh – holy work – they do to ensure that Jews in need have access to life-saving services and Jewish community engagement.

To help with this, we have provided them training for handling high stress environments; counseling; daily support calls; and increased visits from JDC senior professionals to Ukraine to help guarantee that our staff there know that we support them and that they have a safety net when they need that extra comfort required to get through a very tough day. After all, at the height of the crisis in Ukraine, they were spending nights in clients' homes, tending to clients on a 24-hour basis, and even traveling into areas of unrest to ensure the homebound had care.

They even made the extra effort to ensure that Purim was celebrated, with mishloach manot being delivered to seniors and single-parent families afraid to leave home. That dedication, and passion for fulfilling JDC’s mission, is a testament to the sense of community and arevut – mutual responsibility among Jews – we have fostered over more than two decades of community development work in the FSU.

But it is also a reminder that the lessons learned in Ukraine – and throughout the world in crisis zones where we have enacted programs that ensure care for the caregiver – must be absorbed and implemented as part of the value of mutual responsibility we inject into our larger goals as an organization. That connectedness and support system is critical today – not just because it is good professional practice, but because it instills the values that underpin JDC's century of work.

As I was sitting and holding the hand of one of our senior staff in Odessa, hearing about the special challenges the city faces, that she and her family have struggled with, I thought about a photo that hangs outside my office at JDC’s headquarters in New York. It’s black and white, slightly fuzzy, and taken in 1923 at a JDC-supported matzah factory in Ukraine.

Two men are handing out matzah to a crowd of Jews outside the shop window, at the height of the Ukraine famine of the 1920s. And it struck me as poignant that JDC was distributing the “bread of affliction” to Jews still eager to celebrate under such circumstances.  But more importantly, I wondered, who was holding the hands of those men whose families, too, were experiencing the great hunger of the masses?

And I realized how important it is today for our Ukraine staff – and the Jews of Ukraine overall – to know that they have a collective hand extended to them at this time. That during this upcoming Passover in 2014, we are there for them. Worrying for them. And working that much harder to be a strength to them.

In that empathy is the ultimate expression of the story of the Jewish People, especially on Passover: that we can transcend time, place, and even our daily worries to embrace our fellow Jews, acknowledge their suffering, and impart a sense of lovingkindess worlds away. In Odessa, and throughout Ukraine, they need it more now than ever before.

May you and your families – and our extended family around the world – enjoy Passover’s blessings.