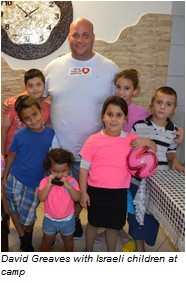 Greaves was of course, anxious and nervous to go down south, and when he arrived at a housing complex full of kids aged 2 -10, he saw a sign in Hebrew "Mi She’mitnadev, Loh M’fached “(Those that volunteer are not afraid).

"Little did they know that I was terrified," Greaves says candidly, recalling how excited people were when he showed up with lots of art supplies, and other items.

Most of the other volunteers with Lev Echad were 17-18 years old and they would volunteer for a few hours and then go back.

"When Israelis learned that I was here and sleeping on the floor in the community centre, they were speechless," Greaves recalls. "I soon started to believe that I was going to have an impact just by being here.”

"Later that day I was playing soccer with a few of the kids in the courtyard when the siren started and I froze... you have about 30 seconds to get to a shelter. As a volunteer you need to make sure that all the kids are accounted for before you shut the big iron door...While I was doing my final check, my new buddy Idur, an 8 years old soccer fanatic and one of the sweetest kids, grabbed my hand and said "Dayveed L'miklat” (David, to the bomb shelter).

I am not sure if it was because he saw terror on my face or that I looked so stunned and didn't realize that everyone was already in the shelter and I was the only one on the outside but I was touched. I had come all this way to take care of the kids and they were actually taking care of me. Needles to stay I stuck close to him for the rest of that day."

Greaves went on to develop a close bond with Idur, whose face lit up when he saw him the next.

Greaves says "I found myself in the bomb shelter more times than I can remember." As a result of living in a war zone, Greaves begun to to suffer from stomach problems "because of my nerves."

As he recalls "I couldn’t relax. I could only sleep a few hours a night and couldn’t wait for the morning to come. I was afraid to take a shower and even have the bathroom door closed for fear of not hearing the alarm. I started to wonder how people can live like this every day, and kids under the age of 14 have lived their whole life with this rocket reality - how could they live this way?"

He began asking this question of the families who lived in the South and learned that for the children "in the evening all the demons come out," as parents told him that "Most kids can’t sleep alone. Many kids are wetting their beds well past the age of that being normal."

Greaves's time in Kiryat Malachi "had a profound impact on him".

"As I looked at my life and the comfortable box I live in, I was amazed by the resiliency of the Israeli people...  These families were not leaving, they were staying put to defend their homes.... The bonds I developed will forever impact my life… What we did, was to provide a very much needed distraction from the rocket reality these kids and their families live with every day."

Before leaving Greaves wanted to offer support to the IDF soldiers and their families. Greaves met with a representative from Israeli Defense Forces, Widows and Orphans fund. “I was told to meet with Daniel Tukser because the work that this organization does is among the most difficult, as the name would suggest.

This past summer, included with the soldiers that were killed, this Fund was notified of 10 new widows and 25 new orphans.

Because of the generosity of many from our community we were able to send 6 of those kids to an amazing camp over Sukkoth," Greaves says.

"I was told that when these kids get together, they become their own support system; often asking each other how their father was killed and when."

Greaves went to visit soldiers and their families at Soroka Hospital in Be'ersheva.

"My daughter Nesya made rainbow loom bracelets for me to give the kids and soldiers while in Israel.... A red and white bracelet representing Canada, with a blue elastic in the middle representing Israel to show Canada has surrounded it with love.

Greaves met "one soldier who had part of his face blown away and was inches from death... He had just been fitted with a prosthetic orbital and cheek bone.  He received Nesya’s first bracelet. Although he was unable to smile or speak, his mother put the bracelet on with gratitude."

To connect with David Greaves, he can be reached at his new company, Protexia, at: david@protexia.ca. Protexia is a Manitoba-based consultancy that informs and inspires fundraising excellence for charitable non-profits of all sizes. Whether leading your team's efforts in fund development through major gifts, planned gifts or donor stewardship, Protexia will serve as your organization’s trusted advisor and consultant. Our style is collaborative; our enthusiasm is unwavering; our vision is yours.