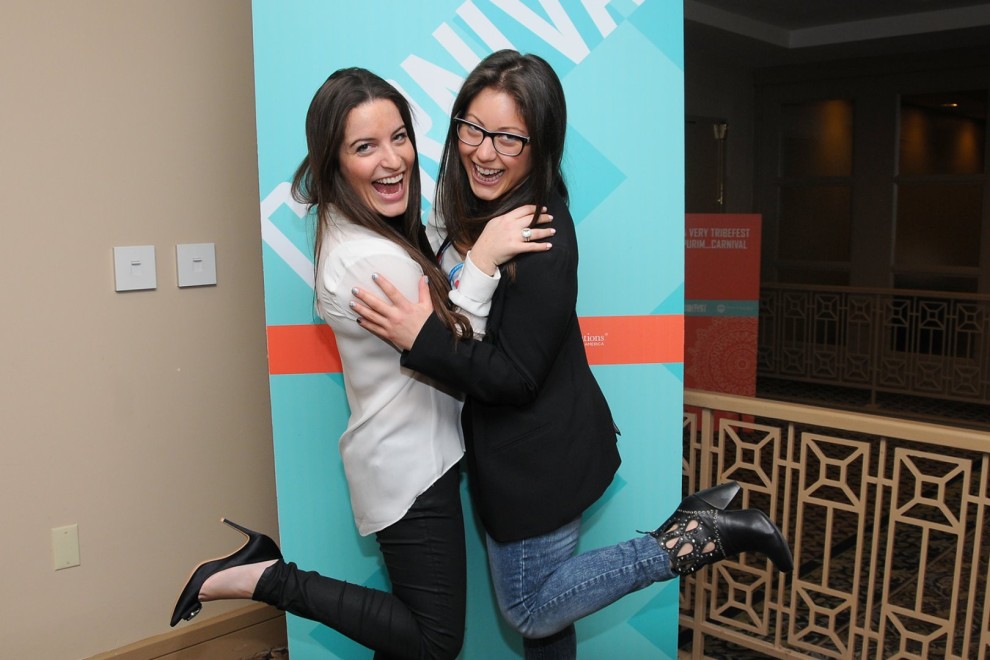 Above Photo: At Tribefest (l-r) Kortney Shapiro and Samantha Banks

The opinions expressed by contributors shared on The Exchange do not necessarily reflect the policies or the positions of the Centre for Israel and Jewish Affairs, its staff, and its board of directors.

I screamed “O Canada” at the top of my lungs during the opening plenary. I giggled like a little school girl when Ben Platt belted out his song from “Pitch Perfect.” I cried as a mother of three told us how lonely it was as a teenager to witness her parents’ divorce with “a side of gay,” referring to her father who came out after 20 years of marriage.

Only one word can sum up the emotional rush I had last month: “Tribefest.”

Tribefest, sponsored by the Jewish Federations of North America, is an exciting gathering of young Jewish leaders held every second year.

Tribefest 2014 took place in New Orleans from March 16 to 18. Eleven young adults from Ottawa accompanied 40 other Canadians. It was the second time a delegation from Ottawa’s Emerging Generation attended and, once again, we topped Canadian recruitment.

Tribefest brings 1,300 young adults together from across North America to experience a Jewish rush. Some find it educational while others find it spiritual. Many go for the creative outlet while others go in hope to find “the one.” But, no matter what one’s motivation for attending might be, it is nearly impossible to walk away from Tribefest without feeling a little less lonely than when you walked in.

New Orleans is one heck of a place. Infused with culture and chaos, yet the city has an underlying haunted feeling that doesn’t seem to leave your bones. The music, played on every other street corner and in the backs of the grungiest bars, literally touches your soul and makes you appreciate jazz in a whole new way. If you can mangle your way through the parades and avoid being harangued to acquire a string of beads, you can find yourself in a quiet candy shop salivating over a box pralines.

Jewish troops – no, not from the IDF, but troops of Diaspora Jews – piled into the Main Stage room at the Sheraton New Orleans every morning. I refer to us as “troops” because every person at Tribefest was on their own mission. They would stand proudly with their city’s delegation and advocate on behalf of their community. This is truly what this conference is all about. It is about the people you meet, the best practices you share, and the ideas that are sparked by the people you hear from.

On the last day, we heard from a Toronto-born victim of rape who opened a Krav Maga studio in New York for woman to become empowered, both physically and mentally, so that fear doesn’t run their lives. She spoke so eloquently and bravely that she brought the entire room to tears. Her underlying theme was that her Jewish values made her the woman she is today. At only 25 years of age, she has given hope to hundreds of women because she took the deeply rooted values of leadership and helping others into her own hands.

I could go on endlessly about how Tribefest changes lives and sends people back to their home communities with a new spark and flair for getting involved. Contact me at sbanks@jewishottawa.com if you’re interested in participating in Tribefest 2016.

I’ll end with this something that really put the entire Tribefest experience in perspective for me.

When someone questioned me about why I’d asked if they were a professional or a lay leader, he asked, “Aren’t we all professional leaders?”