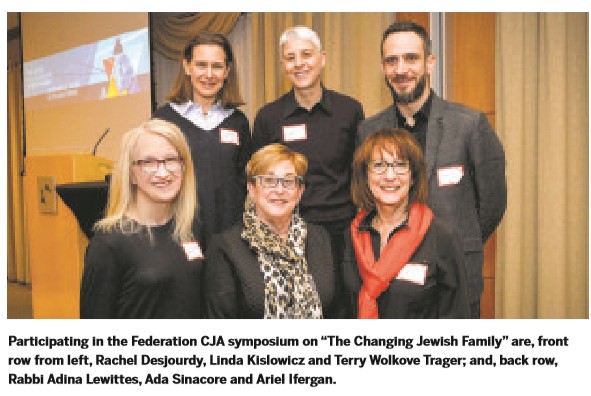 Intermarried families, immigrants, LGBT people and others who do not fit the “norm” of Montreal’s traditional, closely-knit Jewish community should not be excluded. Reaching out to and respecting these groups’ particular needs is not only a matter of accommodation, but vital to the community as a whole.

That was the message community professionals heard at a symposium on “The Changing Jewish Family,” held by Federation CJA on April 15.

The Jewish community must be more open and welcoming to all its members, the event’s moderator Linda Kislowicz, president and CEO of the Toronto-based Jewish Federations of Canada-UIA, told the approximately 60 staff members of social agencies, schools and synagogues and others invited to the daylong event.

“Jewish communal organizations and institutions are challenged to find ways to include families with different cultural backgrounds, different abilities and disabilities, different types of attachment and relationships…” Kislowicz said. “Our communal organizations and work environments are challenged to re-think, re-orient, re-imagine their working assumptions so that they can be relevant and responsive to the increasingly diverse characteristics and interests of Jewish families… The traditional recipe no longer works.”

The participants heard some frank talk from guest speakers Sharon Bitensky, an immigrant from Argentina; Ariel Ifergan, whose wife is a Québécoise Catholic, and Rabbi Adina Lewittes, a Montreal native now living in New Jersey, married to a woman with whom she has raised six children.

Bitensky, who came here from Buenos Aires in 2005 and is today a federation senior planning associate, said the Montreal Jewish community’s “very traditional” character is at odds with the more secular Jewish expression of many immigrants, not only from Argentina, but also Russia, Israel, France and elsewhere.

“The first thing I noticed when I came here was how hard it is to socially integrate into the mainstream of the community.” While the majority of Montreal Jews appear to identify as modern Orthodox, more recent immigrants often are not practising and identify as Jews culturally, she said. Many also live far from the geographic heart of the community, often off the Island of Montreal. Bitensky, her husband and three children, for example, reside in South Shore Brossard.

It may be for financial reasons, or be cause they do not need to be near a synagogue or Jewish school, she said. Their children go to public schools – French ones because of the law. However, their parents are concerned that their kids should have a Jewish education and connect with Jewish life, she said.

The children are primarily francophone, but most community services are in English, which is a “barrier,” and they are not comfortable in a Sephardi milieu because they are Ashkenazi, Bitensky added.

She related the experience of a Jewish immigrant family in St. Constant, also on the South Shore. When the daughter became bat mitzvah age, the parents went to a synagogue in Montreal. They were told they would have to hire a tutor, become members, and attend synagogue at least twice a week (the whole family on Saturday).

In the end, they decided not to do it – the financial and time commitment was too much for them, she said. “It was not only one synagogue, but others as well that could not accommodate them enough… That’s a shame,” Bitensky said.

The result is that many immigrants assimilate, or maintain minimal cultural observances. A more positive trend, she said, is they form “independent minyans” or organize their own ceremonies and holiday events.

Reaching out to these Jews is an opportunity that community organizations are missing, she believes.

Ifergan, an actor and theatre director of Sephardi origin, went to the Université du Québec à Montréal and married Karyne, a native of Lac St. Jean. They have two children. Both work almost entirely in the francophone Quebec milieu.

They have had difficulty finding a place in the Jewish community. They are members of the Reconstructionist Congregation Dorshei Emet, but do not feel completely at home there because it is predominantly English and Ashkenazi.

In addition, he finds most community activities do not take into account the needs of families with two working parents. Lately, he found a connection through the Segal Centre for Performing Arts, where he directed a play this spring. Rabbi Lewittes, the first Canadian woman to become a Conservative rabbi when she was ordained in 1993, left that movement last year because of her stance on interfaith weddings.

She founded and heads Sha’ar Communities, “a post-denominational, pluralistic organization” that welcomes those seeking alternative ways of being Jewish, outside conventional synagogue or communal structures. Many attracted to Sha’ar have been “on the margins of Jewish life.”

They include young LGBT Jews and their families. Rabbi Lewittes warned that not providing a space in the community for these young people to come to terms with their sexuality may be “a matter of life and death.”

She spoke of the 21-year-old transgender woman in New Jersey who aspired to be a rabbi, but took her own life a month earlier. Community institutions have to adapt to societal changes, she urged. “We are living in a do-it-yourself world, shaped less and less by inherited identity and more by constructed or personally curated identity.”

Rabbi Lewittes believes Judaism must recognize interfaith marriages because “they are a reality, and to refuse to officiate at them has no effect, or worse, [the couple] ends up rejecting Judaism.”

Jews who marry non-Jews are not necessarily abandoning their commitment to the community, she said. The community should give these families “a clear message that they want and expect their involvement in Jewish life.”

She performs specially designed ceremonies for such couples that differ from those she continues to reserve for the union of two Jews.

Rabbi Lewittes’ “plea” is that the community drop such labels as non-traditional and intermarried, and even nonJew, because such language undermines the goal of diversity and inclusion.

Kislowicz said the symposium was the first step toward developing a community-wide strategy to achieve that goal.

While the speakers were frank, Kislowicz said, “I think that you will hear a recurring message: a desire to belong, but not necessarily in the traditional or usual way.”