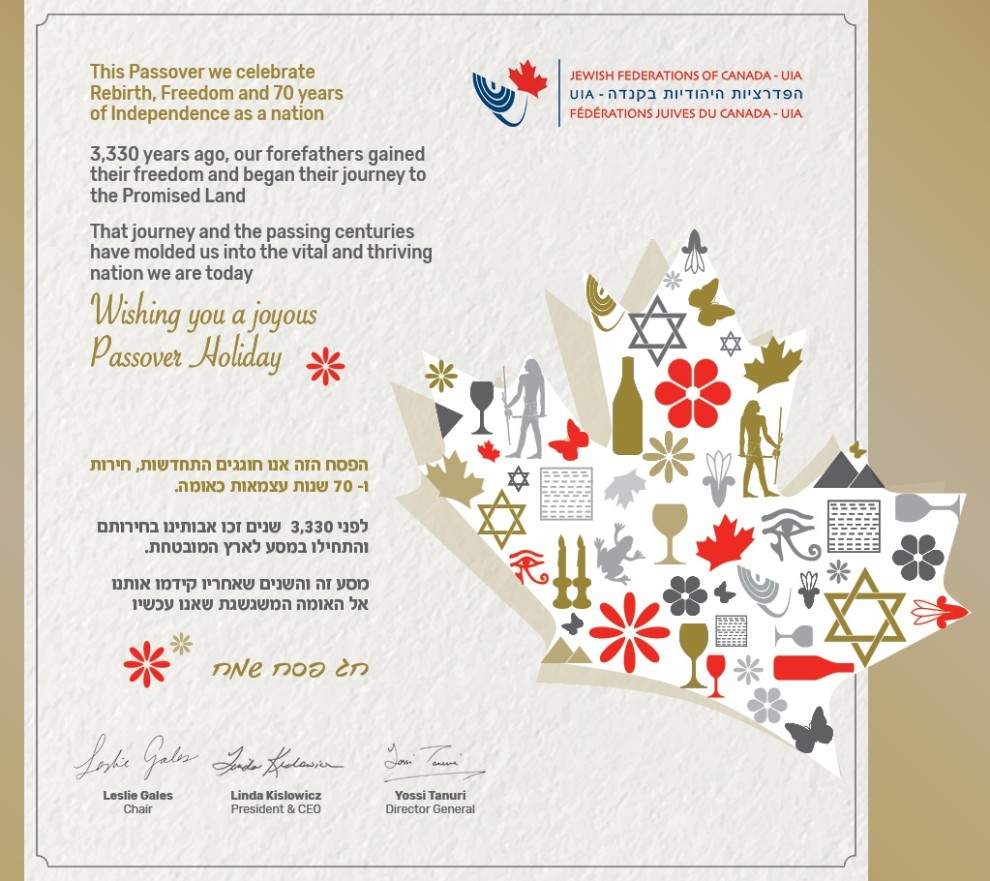 The Pesach story, more than any other, remains the inexhaustible source of inspiration to all those who long for freedom. It taught that right was sovereign over might; that freedom and justice must belong to all, not some; that, under God, all human beings are equal; and that over all earthly power, the King of Kings, who hears the cry of the oppressed and who intervenes in history to liberate slaves………. Nowhere more than on Pesach, though, do we see how the story of one people can become the inspiration of many; how, loyal to its faith across the centuries, the Jewish people became the guardians of a vision through which, ultimately, ‘all the peoples of the earth will be blessed’. - Lord Rabbi Jonathan Sacks

While every Passover is special, this year it will be exceptional for two reasons.

First, 2018 marks the 30th anniversary of March of the Living. What started in 1988 as a group of a few hundred people has since brought over 12,500 Canadians to march in the footsteps of the 1.1 million victims of Auschwitz on the 3-kilometre road from Auschwitz to Birkenau. The unimaginable stories of hundreds of Holocaust survivors have been shared and recorded in the memories of 260,000 people from around the world. In addition, The March of the Living Archive Project  will ensure that their stories will never be lost to history. 30 years of survivor testimony is being digitized and edited into documentaries.

Second, on April 19th, we will celebrate Israel’s 70th birthday on Yom Ha’atzmaut - Independence Day! It is incredible that we will have the opportunity to experience firsthand what our ancestors only ever imagined - a thriving population of 8.7 million people celebrating 70 years of Israel’s existence loudly and proudly.

In the 3000 years since the liberation of the Israelites from slavery and their exodus from Egypt, the Jewish people dispersed. But since its creation in 1948, Israel has become the common element that binds us as a nation scattered across the globe. Whether you were raised as a Jew in Canada, Ecuador or Ukraine, you are welcomed to Israel with open arms. In 2017, The Jewish Agency brought 28,400 people to Israel. The door to the Jewish homeland is never barred.

A country built by immigrants, Israel has reached 70 years old in large part because of sacrifices made by Jewish families from across the globe. Since 1948, almost 24,000 Israelis have died in defence of the Jewish homeland. And still today, violence and terrorist acts are a constant reality for its citizens. But instead of weakening the spirit, this harsh reality has only made Israel and the Jewish people stronger and more resilient.

Our unwavering belief in our right to self-determination has been a critical element in transforming a fledgling nation surrounded by enemies into a world leader in the fields of technology, science and medicine. The Israelites' inherent faith that led them out of Egypt to modern day Israel is in our genes.

So, as you sit around the Seder table with family and friends to read the Haggadah, take a moment to acknowledge and celebrate achievements within your own family. If our history has taught us anything, it’s that dreams can become reality if you work hard to realize them.