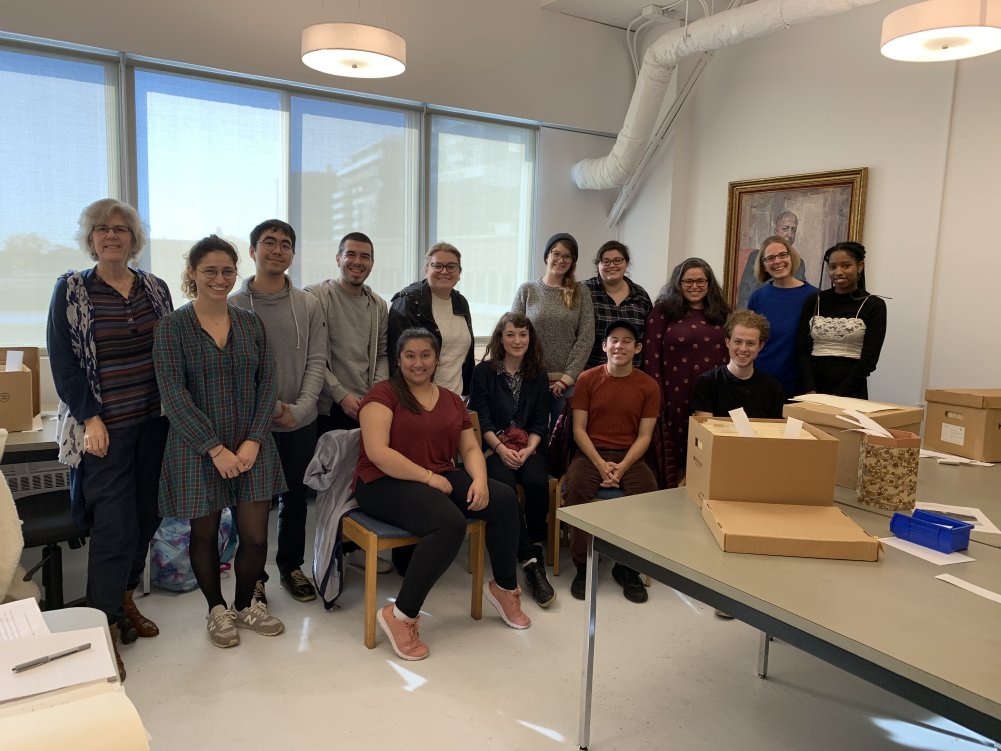 On Oct 29, 2019, the Alex Dworkin Canadian Jewish Archives hosted a research visit of a class taught by Dr. Barbara Lorenzkowski, of the Concordia University Department of History's Chair in Public History. This was the first time we have welcomed such a large group at our new location on Jean-Talon West / Victoria Avenue in Cote-des-Neiges, Montreal, and we were very pleased to note how well the space was suited to this type of use.

In the context of their seminar on the history of childhood, the 12 graduate and BA Honours students considered the history of children, youth, and war while looking at the case files of the War Orphans Immigration Project, a series within the United Jewish Relief Agencies (UJRA) collection.

The War Orphans/ Refugee Youth immigration scheme was spearheaded by Canadian Jewish Congress and carried out under the auspices of the UJRA from 1947 through the early years of the 1950s, ultimately bringing over 1000 survivor youths to Canada. Under the guidance of the Archives staff and Dr. Lorenzkowski, each student was given the opportunity to explore in detail a box of files from our extensive holdings pertaining to this project.

The group also heard a presentation from Archives Director Janice Rosen about a community initiative that brought an earlier group of Jewish war orphans to Canada in 1921, and compared some testimonies, translated into English from Yiddish, which were written by the Ukrainian and Polish orphans almost a century ago.

The class concluded with the students presenting their impressions of the files they had explored. Hearing about the details which resonated with these students was an educational experience for us as well.