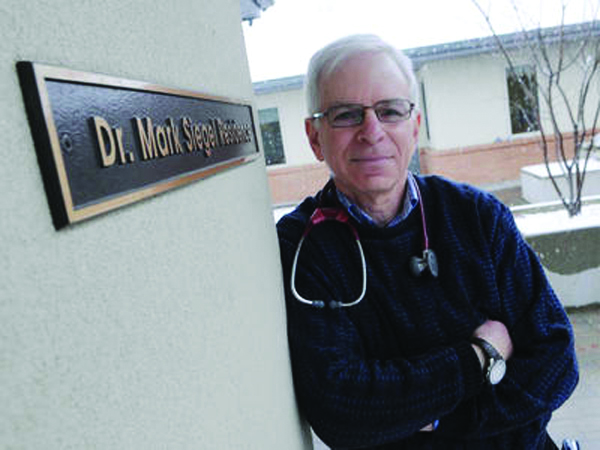 Every year, as I celebrate Chanukah with my family and the Beth Israel congregation, I'm heartened by the large turnout. While the donuts and dreidels lend our Chanukah event a popular appeal, it is the strong connections that have been created within the local community that account for its success.

It is these community connections, both within the Jewish community and with the larger Peterborough community, which prompted Beth Israel President Larry Gillman to immediately step forward in support of the local Muslim community after the firebombing of a local mosque.

"There's so much bad press between Muslims and Jews in the first place and we hope for a better world. We hope for peace and in Canada, we're neighbours."

The reception from the Mosque and the global Muslim community has been heartfelt.

Kawartha Muslim Religious Association President Kenzu Abdella said "Even though it came out of a tragedy, we are working together. We have more similarities than differences. We have so much in common - the details of worship and the ceremonies. Even the stories we hear are similar. At the end of the day, it's [another] house of God".

The Chanukah story is one about overcoming the odds and standing up for your beliefs in the wake of challenges. The actions of Beth Israel resonated with like minded people across the globe. As terrorist acts continue to take innocent lives across the globe, we must stand firm in our commitment to counter hatred with collaborative action.

Just prior to the heinous and unprecedented Paris attacks, Dr. Mordechai Kedar visited Peterborough.  He has a Ph.D. from Bar-Ilan University and is an academic expert on the Israeli Arab population. He served for twenty-five years in IDF Military Intelligence, specializing in Islamic groups, the political discourse of Arab countries, the Arabic press and mass media and Syria's domestic arena. Dr. Kedar delved into the complex infrastructure of the Islamic State and explored its far reaching channels. In response to a question about how to counter this terrorist body, his answer was simple. Just keep doing what the Jewish people have done for centuries - stand up for what's right and continue practicing our faith as we have always done.

In a few short weeks, Jewish federations of Canada -UIA is wrapping up its annual campaign. As a representative of the Canadian Jewish community, JFC-UIA supports the Jewish people by investing in vital social welfare and Jewish identity programs in Canada and Israel. It also supports partner agencies like the JDC that provide critical aid to Jews in crisis across the globe. Visit www.jewishcanada.org to learn more about the valuable work carried out by JFC-UIA and its partner agencies.

Last Sunday, JFC-UIA held a board meeting in Montreal. It is heartening to know that the organization is directed by a group of dedicated professional and lay leaders that is committed to strengthening our national Jewish community.

As 2015 comes to a close, I look forward to a new year filled with health, joy and peace.