The Sidney Warren Gift to Israel: Two years on

An update on the impact the Sidney Warren gift has made on Israel’s northernmost region. 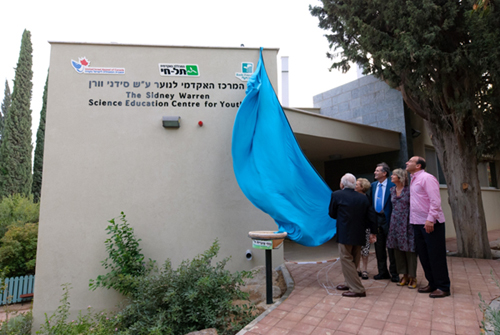 They are the children Sidney Warren z”l never had. They number in the hundreds, each the beneficiary of inspired choices made by his Executor, Jack Prince, of programs and projects that have infused hope and opportunity where none existed before.

The Sidney Warren Estate has provided $1 Million for a Science Education Centre for Youth at Tel Hai College, $400,000 for the three year Full School Program at Danziger School in Kiryat Shemona and $50,000 for a three year program for youth at risk also in Kiryat Shemona. Together they constitute the largest gift ever made from Atlantic Canada to Israel.

Now after two years since the Science Centre was opened and with the programs fully implemented, Jack Prince can already look back with immense satisfaction on having fully realised the spirit and intent of the Sidney Warren Estate.

It was, of course, entirely appropriate for Jack to choose the Upper Galilee in Northern Israel, a region with which Halifax and the Atlantic Region have been twinned for many years through UIA’s Coast-to-Coast Partnership 2000 initiative. Sidney, after all, was himself a proud Haligonian and to have his name associated with this significant community undertaking in Israel through his Estate closes a circle that brings together all he cherished.

But there were, as well, other persuasive factors which drew Jack to this part of Israel, namely the regions fragile security situation, coupled with its economic hardship.
Save for Sderot and the settlements facing Gaza, no other region has suffered as much from rocket fire as frequently and devastatingly. Yet, similar to their brethren in the south, their presence along Israel’s frontline sends a message of Israel’s indomitable resolve that the enemy, with all its intent to terrorize the population to flee, will not dictate where her citizens may or may not live.

Meeting such people and then learning how many of them are battling to provide their children with basic necessities and moreover, that educational facilities taken for granted in other parts of Israel were absent in the Upper Galilee, Jack became quickly convinced he need look no further.  Knowing Sidney as he did, he could not think of a better place to bind Sidney’s love for the Jewish people than to the future of this region and especially the welfare of its children.

Two years on, Jack’s faith and trust in the residents of the north have been fully justified.
The Full School Program at Danziger School is a multi-level holistic strategy for students between the ages of 12-17 created to fill in grave gaps that have undermined their ability to cope with educational, social and psychological challenges. Led by a brilliant team of proven educators and specialists -provided by the Rashi Foundation - the outcomes after two years have been considerable.  The despair many of these children experienced has been replaced by hope and promise. So successful has it been that the pharmaceutical giant, Teva, has made a multi-year commitment to the school once the three year program ends.

The ripple effect generated by the success of the program has introduced a buoyant note of optimism into Kiryat Shemona – something not felt for a very long time.

The jewel in the crown among all the institutions in the Upper Galilee is Tel Hai College. Truly, the engine of the north, a place that crackles with creativity and innovation.  And, it is here where the Sidney Warren Science Centre for Youth has been established. Serving the entire region, students from all schools in the area are exposed as they never have before to the wonders of science. Of special interest is the prominent presence of students in the Full School Program at Danziger at the Science Centre.

Already the Science Centre is considered nationwide as the model for all science centres for youth. With absolute certainty one can predict a future where many a scientist will look back at the time he or she spent at this laboratory as the critical formative experience in their choice of a profession. For a country that relies on its brain-power as its only major resource, the value of establishing such a facility cannot be overestimated. 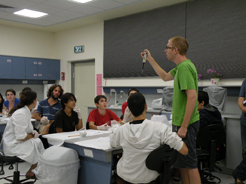 Jack Prince also sought to liberate what could so easily be lost, the human potential locked in youth at risk. Israel simply cannot afford to leave anyone behind. Everyone has to count. With this in mind funds were allocated to the Centre for Youth at Risk run by Elem, a non -government organization.With the passionate commitment of staff and volunteers, the centre attracts dozens of youth to training sessions and workshops simply by virtue of their welcoming non-judgemental environment. Here with great skill these youth are steered toward an appreciation of their self-worth and possibilities they could not have considered before.

Each of the initiatives that the Sidney Warren Estate has funded has its own unique rationale. Together they constitute an investment whose dividends will be enjoyed for generations to come. Simply put, lives have been changed.

Jack would be the first to recognize the input of the United Israel Appeal and the Rashi Foundation for their guidance and implementation of the programs. In Israel the staffs of these organizations and the beneficiary institutions, Tel Hai College, Danziger High School and Elem have clearly been imbued by a sense of mission to execute the programs beyond that of doing a professional job. For them it is quite obviously an act of patriotism, Zionism in its purest form that goes to the heart of their commitment to serve the residents of the north and their children.

Two years in a life-time is a relatively short period. Two years in the life of a young person can absolutely determine his or her future and for Sidney Warren’s ‘children’ not a moment too soon.

As the programs outlined above solidify even further and their impact felt even stronger, one can only admire Sidney Warren’s vision to entrust his Estate to Jack Prince for its fulfilment.

It is a Jewish story that will be added to Israel’s narrative of what can be achieved when Jews, however far apart they may live, come together with the common purpose to advance the cause of the Jewish people. And, above all, it is a story with a happy ending.