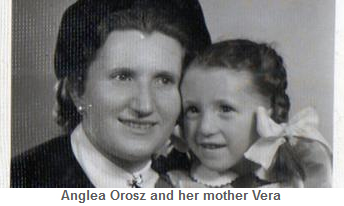 It’s fair to say that Angela Orosz doesn’t remember much of anything about her time in Auschwitz. After all, she was barely more than one month old when it was liberated on Jan. 27, 1945. Nevertheless, she admits to feeling “terrified” about returning to the Nazi death camp.

Orosz, who turned 70 in December, will join hundreds of other Holocaust survivors, heads of state, political and religious leaders and many more to mark the 70th anniversary of the liberation of the camp by Soviet army forces.

“I didn’t want to go,” Orosz said on the phone from Montreal. “My daughter pushed me. She wants to show what we became. They tried to wipe us out, and now we’re flourishing.”

Orosz, who has two children and seven grandchildren, with one more on the way, will be accompanied by her daughter, Katy, for her first trip back to the place of her birth. As far as she knows, she is one of only two people born in the camp to have survived. The other was born on liberation day in 1945 and now lives in Hungary, but he is not planning to make the trip.

Making the visit more palatable for her will be her post commemoration trip. Orosz will fly from Poland directly to Israel, copying the itinerary of March of the Living (MOL) participants.

As it happens, documentary filmmaker Naomi Wise will be in Poland to record the return of five Canadian Holocaust survivors to Auschwitz, including Orosz. She will tell their story, beginning in Canada as they prepare for the momentous event, and will follow them to their hometowns in Poland before accompanying them to the commemoration ceremony in the camp.

Wise said the short documentary films from the trip will be available for public viewing on the MOLarchiveproject.com website, along with previously recorded testimonies of other Shoah survivors. Citizenship and Immigration Canada provided a grant of $100,000 to make the films, along with the already completed documentary Auschwitz-Birkenau: 70 Years After Liberation, A Warning to Future Generations.

Orosz’s parents, Tibor Bein and Vera Otvos, were Hungarian Jews who married in 1943. When the Germans invaded Hungary in March 1944, they were sent to a ghetto and were soon deported to Auschwitz. Her mother was two months pregnant at the time. With the naivete of someone unfamiliar with the camp, she identified herself as pregnant to Dr. Josef Mengele, who supervised the selections of those who would live and those who would be killed.

For some reason, Vera was spared from joining others being sent to the gas chambers and death. She was first put to work doing hard labour, working on roads. Later she was transferred to the kitchen, and finally she was sent to “Kanada,” the depot where prisoners’ property was sorted.

“Mengele didn’t forget about her. He took her to experiment with the pregnancy,” Orosz recounted.

Her mother was kept with twins and given injections for some unknown purpose. Remarkably, she survived and gave birth to Angela on Dec. 21. Two hours later, she had to join others in a roll call.

During the day, her mother left her alone on the top bunk in the barracks. Orosz was too weak and frail to cry. Despite having only water to drink, her mother was able to produce enough milk to keep her alive, Orosz said. Somehow they survived until liberation, but on Jan. 27, Orosz weighed barely more than a kilogram.

After liberation they travelled to a number of Polish cities and ended up in Slutsk, in what is today Belarus. They returned to Budapest in October 1945.

At one year of age, Orosz weighed three kilograms, about the size of a newborn. Nobody thought she’d survive except her mother and one doctor. She was always considered a miracle child, Orosz said.

Orosz and her family left Hungary because of pervasive anti-Semitism. Today she feels obliged to speak out and “to face anti-Semitism head on.”

In travelling to Auschwitz, Orosz will be part of a group of about 300 camp survivors. This is likely the last such large-scale commemoration of its kind, given their ages, said Eli Rubenstein, national director of March of the Living Canada.

MOL Canada’s Digital Archives Project will not only document the 70th anniversary event, but it is collecting previous recorded survivor testimonies, which will be stored on an interactive website as sn educational resource, said Wise.

Auschwitz-Birkenau: 70 Years After Liberation, A Warning to Future Generations, Wise’s film, will be shown in Parliament Jan. 27 as part of an event hosted by Multiculturalism Minister Jason Kenney.