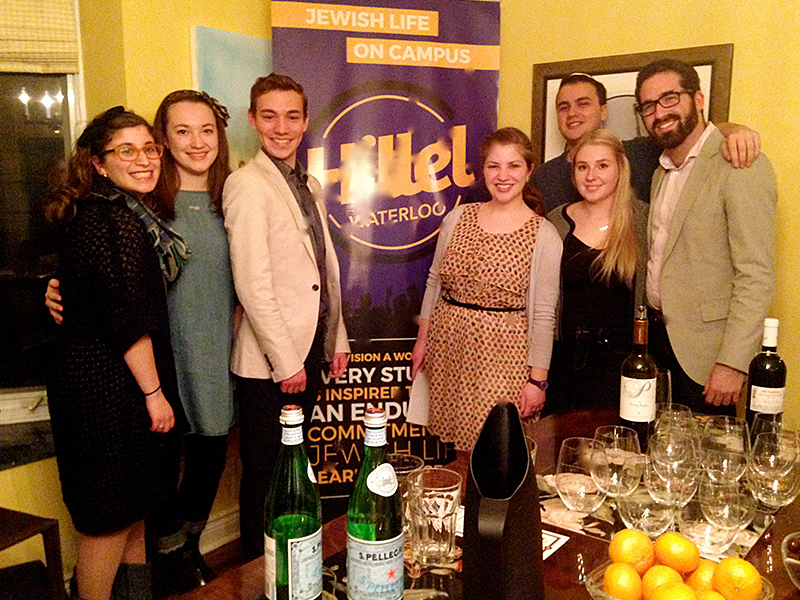 Despite the hype about anti-Semitism on Canadian university campuses, a handful of Jewish students involved with Hillel at York University and with Hillel in Waterloo stressed during meetings with prospective students that they feel totally safe being openly Jewish on campus.

Organized by Hillel Ontario, the March 7 and 9 meetings enabled high schoolers interested in attending York, Wilfred Laurier University or the University of Waterloo, as well as their parents, to hear first hand about Hillel’s activities at those schools and what Jewish life there looks like.

On March 7, at a private residence in Thornhill, about 20 people – prospective York students and their parents – listened to members of the Hillel executive and students who participate in Hillel events discuss their experiences and answer questions.

Natalie Slavat, president of Hillel at York; first-year student Michael Paskaru; and third-year student Ricki Birnbaum, reassured the audience they feel very safe at York, despite the recent controversy surrounding a mural hanging in the school’s student centre that depicts a person wearing a Palestinian flag about to throw a rock at what looks like an Israeli bulldozer.

“I felt really lonely at York at first. But I’ve met so many friends through Hillel. Hillel promotes unity among so many Jews, from atheists to those who are Orthodox,” Birnbaum said.

In addition to hosting social events and providing a lounge where students can relax, Hillel has helped the students with things such as getting religious accommodation to move exams scheduled for Shabbat or holidays, panelists said.

“I went to a public high school. Through Hillel at York, I feel I’ve gained a sense of community and belonging,” Paskaru said.

Slavat said Hillel has helped her carve out her own Jewish identity and “express my Judaism my own way.”

In response to a question from an audience member about anti-Semitism and anti-Israel sentiment on campus, Slavat said the mural controversy and politics surrounding the boycott, divestment and sanctions (BDS) movement – in 2013, the York Federation of Students passed a resolution to endorse BDS – sometimes make things “tough.” But she stressed that Hillel has a strong working relationship with York’s administration and campus security, which makes the Jewish community on campus feel looked after.

“We have interns on campus whose job it is to engage students about Israel. We work to explain to people that, for example, Israel has checkpoints because of security concerns, but also to get people to associate Israel with things other than war,” he said.

At the Hillel Waterloo meeting March 9, held at a home in Forest Hill, a different panel of students shared their experiences.

They praised Hillel for providing social opportunities and enriching their sense of Jewish community life, and addressed the group’s recent victory in campaigning to defeat a recent motion calling for the severing of ties between the University of Waterloo and Israeli academic institutions.

She added: “These things aren’t enjoyable, but it brought people out of the woodwork. People we didn’t know were part of the Jewish community… and even non-Jews were all walking around until the last minute [before the motion went to a vote] talking to people about the issue.”