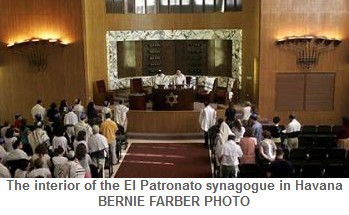 It may not happen tomorrow or the day after, but some day in the foreseeable future, American Jews will step to the plate and deliver to their co-religionists in Cuba the goods and products that today are provided by Canadian Jews, says Bernie Farber.

Farber, former CEO of the defunct Canadian Jewish Congress, was commenting in the aftermath of the announcement by U.S President Barack Obama that he was easing diplomatic restrictions on Cuba, located about 90 miles south of Florida.

Although the U.S. trade embargo remains in place, Farber is convinced the trend is for an opening of relations with the island nation. And that will make it more likely that U.S. Jewish groups and individuals will step in and do for their Cuban co-religionists what Canadian Jews have been doing for 53 years.

Since 1962, around the same time the United States began to isolate the Communist government in Cuba, Canadian Jews have been shipping kosher food products to assist the tiny Jewish community.

Over the years, Cuban Jews – dubbed “Jubans” by singer Gloria Estefan, who used to perform in the wedding and bar mitzvah circuit in Miami  – have received Passover products on an annual basis from Canada. In addition, Canadian Jews ship vital items such as pharmaceuticals, both over the counter and prescription items, as well as jeans, toothpaste, deodorant, bras and other necessities the Communist regime can’t produce.

In addition to community-sanctioned effort, operated through Congress while it existed and now by the Centre for Israel and Jewish Affairs (CIJA) and UJA Federation of Greater Toronto, individual Jews flying to Cuba sometimes bring suitcases filled with badly needed consumer items.

But it would make more sense, from a logistical perspective and because many of Cuba’s 15,000 Jews fled to Florida after the revolution, for that effort to be taken up by American Jews, said Farber, whose son, Max, had his bar mitzvah in Cuba in 2006.

On Dec. 17, Obama pledged to ease the U.S. trade embargo on Cuba and begin the move toward full diplomatic relations. The move is controversial in some quarters in the United States, not least among Cuban expatriates, who argue sanctions are needed to undermine the island’s Communist government. In the wake of the U.S. announcement, the Cuban government arrested several human rights activists, they noted.

Proponents of the thaw argue the United States maintains diplomatic and economic relations with many unsavory regimes.

Farber believes Obama’s overture is likely “the first step to the end of the trade embargo.”

As restrictions on ties with Cuba diminish, “You could see a strengthening of the [Jewish] community,” he said.

The 1,500 Cuban Jews don’t have access to a rabbi or teachers, to a shoichet or a cantor. And as far as food aid goes, it makes more sense to ship it from nearby Florida than distant Toronto, he said.

The Canadian Jewish community began to assist Cuban Jews at the request of the American Jewish Joint Distribution Committee (JDC). At the time, senior Congress professional Ben Kayfetz raised funds for Cuban aid in Toronto synagogues that were used to buy  kosher Passover products, which were shipped “by slow boat to Cuba,” Farber said.

The goods are purchased in Toronto with funds raised through UJA Federation, then shipped to Halifax and sent by container ship, she said. They are received at the El Patronato synagogue, known also as Gran Sinagoga Bet Shalom, where they’re distributed to Jews.

For at least the last 12 years, since she’s been involved with the program, additional funds totalling $3,000 have been provided by a New York-based charitable organization for other items she said.

With the opening of U.S. relations, Osheroff suggested “a great idea would be  for North American Jewish federations to mount a joint effort” for Cuban Jews.

It’s too early to tell whether the U.S. diplomatic overture will see U.S. organizations stepping in to help, he said.

“If other communities will do it and do it more efficiently from a logistics and cost standpoint, we will pay heed to that,” he said. “In the next few months, we’ll ascertain to see if that will happen.”

The JDC re-entered Cuba in 1991, at the invitation of the local community.

In addition to the annual Canadian aid shipment, the JDC provides pharmaceuticals, which are distributed as well to the island’s non-Jewish population, as well as weekly chicken dinners, said JDC spokesperson Michael Geller.

JDC also supports bar and bat mitzvahs by bringing in rabbis to officiate, he said.

Almost every year since 2003, young Cubans fly to Toronto and join Canadian participants in Birthright, the annual subsidized trip to Israel for young people. Since the program began, some 120 Cubans have taken part, with a large number eventually making aliyah, Soberman said.

The Birthright connection has led to other joint programming, in which young Canadian leaders travel to Cuba to interact with their Cuban contemporaries, he added.

The Canadian-Cuban Jewish connection has support at the state level. As part of Operation Cigar, “the Canadian embassy had facilitated the immigration of Cuban Jews to Israel,” Farber said.

American Jewish groups are monitoring the developing situation closely. If the doors to Cuba open, “it will be easier to have back-and-forth contact [that] will surely enable a deeper and more fluid relationship including the presence of its members in global Jewish forums and travel to Israel,” said Dina Siegel Vann, director of the American Jewish Committee’s (AJC) Belfer Center for Latino and Latin American Affairs.

“[Like] the rest of the Cubans, Jews will be able to benefit from the U.S. plans for increased connectivity and tourism,” she said.

“From AJC’s perspective, we hope that this is a step in the right direction after 50 years of a policy which did not bring about the changes everybody aspired for. This is a process which ultimately should hopefully lead to increased democratic rule, human rights, freedom, open trade and mutually beneficial relations between Cuba, the United States and the rest of the hemisphere,” she stated.

But as for the American Jewish community supplanting the Canadian in their support for Cubans, Soberman said, “It might make some sense for them to partner with their friends and cousins  in south Florida. But I don’t imagine anything would change imminently… Nothing happens in Cuba quickly. I imagine it will take some time.”