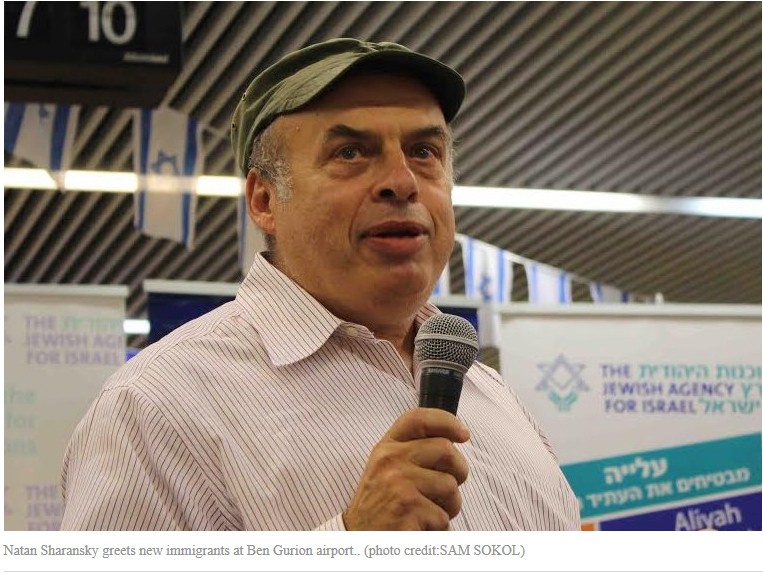 Sharansky: 2014 'a year of record-breaking aliya'

France, followed by Ukraine, led the pack in terms of numbers of immigrants to Israel in 2014, the Jewish Agency announced in a year end summation released on Wednesday.

Immigration overall increased by 32 percent, the group said, in what agency chairman Natan Sharansky termed “a year of record-breaking aliya.” The aliya data are based on information from the Jewish Agency and the Immigration and Absorption Ministry.

Some 26,500 immigrants came to the Jewish state, 6,500 more than in 2013, the agency said, cautioning that its data was “tentative and is based on preliminary estimates.”

This year marked a “historic shift,” because “for the first time in Israel’s history, the number of immigrants who came to Israel from the free world is greater than that of immigrants fleeing countries in distress,” Sharansky said.

He predicted “further increases in aliya from around the world” and called on the government to maintain “aliya encouragement and immigrant absorption as top priorities.”

France became the leading source of immigrants for the first time with almost 7,000 coming in this year, double the number from 2013, the agency stated.

Despite this summer’s war with Gaza and attendant missile fire on Israeli cities, French Jews continued to stream here over the summer, fleeing rising anti-Semitism and economic malaise.

“Even if Israel is burning, we will be there,” one immigrant told The Jerusalem Post after arriving from Paris earlier this year.

During this summer’s war, attacks on Jews surged.

Among other incidents, a mob rampaged through the largely Jewish Parisian suburb of Sarcelles, protesters surrounded a synagogue, trapping worshipers inside leading to a brawl.

Most recently, a Jewish woman was raped in a home invasion that targeted her because of her religion.

Ukraine followed closely behind France, with 5,840 immigrants, many of whom fled to Israel in the wake of the Russian backed civil war and economic collapse that followed the past winter’s Euromaidan Revolution that toppled the administration of president Viktor Yanukovich and replaced it with a pro-western government.

Aliya from Ukraine increased by 190% over the previous year “due primarily to the ongoing instability in the eastern part of the country,” Jewish Agency stated.

Some 1,310 Jews have come from Donetsk and Luhansk, the central population centers of Donbass, the center of the insurgency, between January and November, an increase of 1,000% over the same period in 2013, according to Jewish Agency figures.

Some 226 immigrants, over 150 of them from the battle zone, arrived last week alone.

In the past week Sharansky called on the government to continue providing budgets for immigration and absorption, even during times of fights over the allocation of funds, because next year, he said, there is expected to be another increase in immigration, especially from France and Ukraine.

Speaking to the Post in September during a visit to Dnipropetrovsk, Sharansky, a native of Donetsk, predicted a 400% increase in Ukrainian aliya.

Overall, immigration from Western Europe increased by 88%, from the former Soviet Union by 50%. Over half of those who came were under the age of 35.

“We expect that some 10,000 new immigrants will come from France alone next year, and we will surpass 30,000 immigrants from around the world – and even more,” said Immigration and Absorption Minister Sofa Landver.