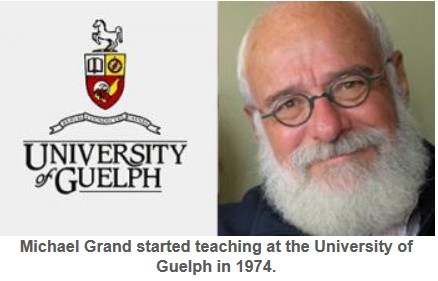 Michael Grand started teaching at the University of Guelph in 1974.

Michael Grand, who is retiring from his impressive 40-year career as a University of Guelph psychology professor, is being honoured next month for his dedication to fostering a positive Jewish atmosphere on campus.

Speaking to The CJN in advance of the May 12 event at Beth Emeth Synagogue, which will also raise funds for a Jewish student engagement fund in his honour, Grand said that when he began teaching at the university in 1974, he joined a small group of Jewish faculty and students who would take part in weekly bagel lunches.

He soon took an active role in recruiting Jewish students to come to the meals and other events organized by Guelph Hillel, then known as the Jewish Student Organization.

From 1976 until last year, Grand served as the organization’s faculty adviser. He was also a member of the school’s multifaith resource team, from 1990 to 2014, and helped develop the university’s religious accommodation policy.

“I spent some time trying to make the university campus a more welcoming campus for Jewish students and for all students who come with diverse backgrounds… I’m very proud of that fact,” Grand said.

He said Guelph has developed into “one of the most welcoming of campuses in Canada,” for Jewish students, adding that the Jewish student population has grown from two students in the mid-1970s to about 1,000 today.

Grand recalled a time when Jewish groups wanted to pull funding from the bagel lunches, but he and his peers lobbied to save them.

“We argued that the bagel lunch was a vehicle to bring Jewish students together… If we were worried about the future of the Jewish People, we had to put Jews together… A lot of kids made lasting friendships and I’ve attended many, many weddings of students from Hillel that began at either a bagel lunch or a Shabbaton,” he said.

Hillel Ontario’s executive director Donald Sylvan said that “Prof. Grand has been an influential presence in the Canadian Jewish community, including being a member of the Hillel Canada board for many years. Canadian Jewry owes a debt of gratitude to Michael Grand for his leadership and dedication.”

“It just felt like the natural thing to do. I’m a proud Jew. I have never hidden the fact that I am Jewish… and being with students was part of that for me. The kids made me feel young, and I love their excitement, and I love their interest and I love their commitment, and all of these things have enriched me,” he said.

“So I feel kind of strange actually being honoured, because I feel in many ways that it was they who have given me so much.”

Torontonian Suzy Rosenstein, an organizer of the event who was a student at Guelph in the 1980s, recalled the impact Grand had on her.

“I’m from Philadelphia, so as soon as I got to Guelph, I got involved with the Hillel and met Michael immediately. He took me in, because I didn’t have family in Guelph. He took me in as a friend. He invited me to Passover seders, and he was just a wonderful friend, and he even ended up reading our ketubah for us at my wedding,” she said.

“He was very warm and accepting and not judgmental at all about whatever level of Judaism you practised. He was very inclusive and his emphasis was on connection and really building a family, like a home away from home… I honestly don’t know what Jewish life in Guelph would have been like without him.”

She said the upcoming event is a chance for former students and colleagues to “hear some great stories and some warm speeches and have a chance to talk to Michael again.”

Rosenstein is asking former students, friends and colleagues to contribute to an online memory book at www.celebrateahero.com.

Grand said that although he’s officially retiring, he’s “not planning to disappear from the Guelph scene,” and plans to continue volunteering for Hillel Ontario.