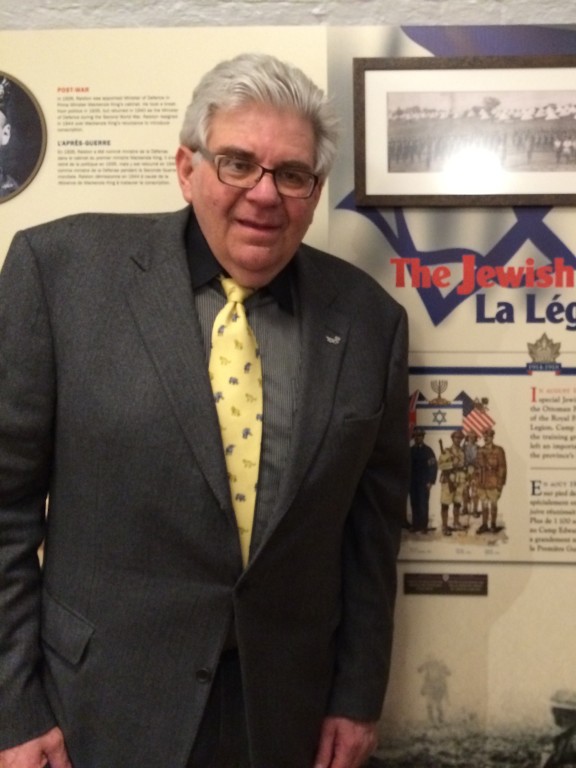 The pictures and  plaques in the Atlantic Jewish Council  offices reflect 23 years of service  by its retiring executive director Jon Goldberg.

Halifax-born and raised, Goldberg, 70, will end his term after the biennial AJC convention in November. Toronto-native  Naomi Rosenfeld, who attended Camp Kadimah in Nova Scotia and served as Hillel director for Atlantic Canada, will take over the position.

Goldberg is proud  of his 23 years at the AJC helm.

"With  the support of dedicated lay leaders,  we have promoted... an Atlantic Jewish community to the national Jewish organizations," he said. "There's  been  a voice for Atlantic  Canada at the highest levels of Canadian Jewry."

He listed major accomplishments of his tenure including the strong Yom Hashoah and Holocaust Education Week programs, thanks to staff member Edna Levine and dedicated  volunteers. Newcomers from Israel  have  increased the  local population by 20 per cent. A Jewish film festival is now in its third year in Halifax. He was instrumental in starting the Atlantic Jewish Foundation with over $1 million to provide education and camp scholarships and as­sist with projects. He built lasting bonds between Israel and Atlantic Canada.

Kathy Zilbert, a past president of AJC, has worked with Goldberg for 20 years. "Jon is often thought of as a gruff guy who speaks  his mind,  but I've seen  his heart and  soft  side... Little Israeli  children in our Coast to Coast partnership region in the Upper Galilee refer to 'Big Jon' as their friend, and rush to see him year after year. I've sat in Jon's office... and  observed how he truly cares what happens to all of us as he's worked diligently to keep the [At­ lantic] Jewish community alive."

Goldberg gets a bit emotional when he remembers one of his achievements.

"I was seeking ways to help the community of Mevoot Ha'hermon in northern Israel many years ago as part of a mission. The mayor said  they needed  scholarships and computers, but I suggested  something... that would touch the hearts of of donors. He took me to a school with severely disabled children where there was no air conditioning, old-fashioned wheelchairs, even old eating utensils for these children who needed personal feeding. I asked, 'What do you really need?' and the mayor gave me a list."

In the last 10 years, Atlantic Canadians have donated $250,000 to provide and upgrade facilities. "At the time, the Israeli government didn't have funds  to support the community's needs, but the mayor convinced them to match what we gave."

A former  menswear retailer,  Goldberg brought his entrepreneurship to the Atlantic Jewish Council when he started in 1993. He had dealt with the public and made connections and was easily able to interact  with the Jewish and non-Jewish communities.

While in retail, he volunteered  as a canvasser and chair of UJA and Israel Bonds campaigns,  working with Dov Harris, director  of financial  resource  development, regional communities, [Jewish Federations of Canada - UIA].

On hearing of his friend's impending re­tirement,  Harris wrote, "Some of my best working years were shared with you, all unforgettable... Under your leadership you lent stature to the AJC that placed you among the best of federation executives."

Goldberg served on the Camp Kadimah administration committee, completed  the Sar-El program in Israel and "came back in the early '90s revved up about Israel."

He notes more than 80 families from Israel have settled in Halifax in the last seven years. Michael Giefman praised Goldberg's con­ tribution  when  his family arrived  several years ago."He gave us the chance to be here," says Giefman, now a successful mechanic in Halifax. "He's helped a lot of families... [and] gave our children the opportunity to attend Camp Kadimah which they've loved."

Goldberg says the job is challenging. "We have five staff  people  who can't  provide all the services needed  in our region. The distances are too great, the population too small and the dollars aren't there... I truly hope [Naomi Rosenfeld] be able to regenerate the community. As long  as we have great volunteers and lay leaders, we should be OK."

He  added ,  "I'll  miss  the  office..., the chevra with staff and volunteers. I'll miss the connections with people  from Israel, Ottawa  and  Toronto  and,  of course, the opportunity to help people...I always  felt I was  young  at  heart, I guess, until I realized it was time to leave [this position]."