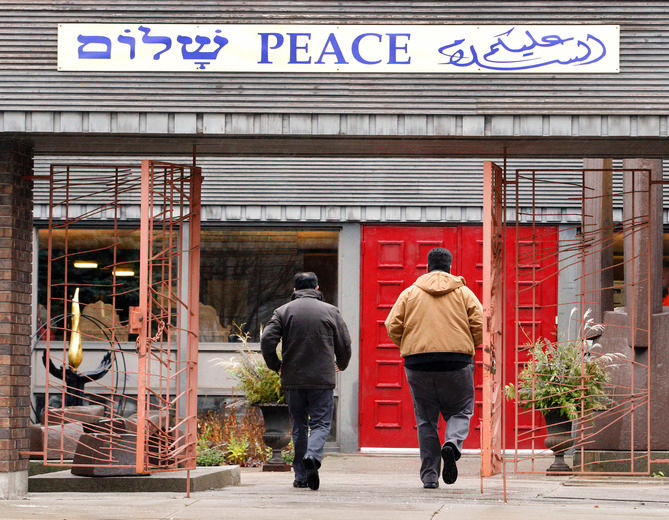 Last Friday, the local Muslim community prayed in a United church. This week, it's a synagogue. And next week, they'll be at an Anglican church.

"Thank you for having us," one woman said, before removing her shoes and heading downstairs.

Arson to the Kawarthas' only mosque on Nov. 14 has left Muslims without a place of worship.

City police deemed the fire to Masjid Al-Salaam as a hate crime.

Since the fire, many religious dominations stepped forward, offering their spaces for Islamic prayer.

Gillman reached out to the Kawartha Muslim Religious Association (KMRA) as soon as he heard about the blaze.

"There's so much bad press between Muslims and Jews in the first place and we hope for a better world. We hope for peace and in Canada, we're neighbours," said Gillman.

Beth Israel already shares its space with the Unitarian Fellowship of Peterborough.

Gillman rushed around busily before the 1 p.m. Jumuah prayer, making sure everything was in order.

"We're just trying to make sure everyone is being looked after and we're being a good host," he said.

Though it wasn't the first time Muslims prayed at Beth Israel, it was the first Jumuah prayer to be held at the local synagogue - perhaps a first at any synagogue.

Muslims pray five times a day, with Jumuah being their Friday congregational prayer.

Gillman was told by Abdul Hai Patel, an Imam in Toronto, that during his 46 years in Canada he hadn't ever heard of Jumuah held in a synagogue

"(Hai Patel) said it was a historic first," Gillman said.

About 150 Muslims gathered at the synagogue for prayer Friday.

Masjid Al-Salaam has 200 members and is run KMRA.

"We're very grateful and we hope this relationship will continue and will create something even better in the future," said Abdella.

Abdella said they're expecting to be back in Al-Salaam before Christmas.

"We are really looking forward to that," he said.

While grateful for all the support they've received, Abdella said there is a feeling of displacement among Muslim community.

"That feeling is hard," he said.

The mosque's insurance is covering the majority of the $80,000 damage, with funds raised from a crowdfunding site making up the rest.

Set up by Duane Rousselle, a Trent University Ph. D graduate, the website drew in more than $110,000 in 30 hours. It was halted at the request of the association.

Abdella said the rest of the funds would go to charity, though they're not quite sure where yet.

The association would like to get feedback from Rousselle, donors and community members on where it should go.

Muslims returned to the synagogue later Friday night for their monthly potluck social.

It's held on the last Friday of each month and it was the first one since the fire.

It was also their first vegetarian potluck, respecting the kosher setting.

"It's good for us - it's healthy," said Abdella smiling.

On Friday, Muslims are meeting at All Saints Anglican Church for Jumuah.