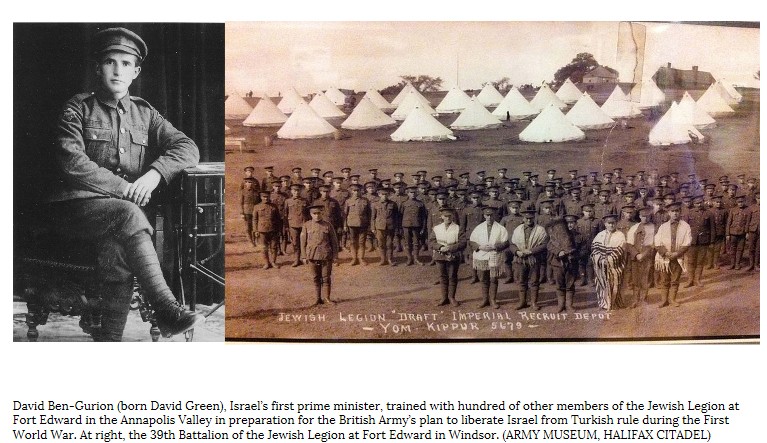 Nova Scotia and the Jews of the First World War

It’s a world away and more than a lifetime ago.

The wooden structure still overlooks the Avon River at Windsor, but nothing suggests the connection between Fort Edward and the modern-day State of Israel.

Nor is there any sign of a link between the small rural community at the edge of Nova Scotia’s Annapolis Valley and the man known as the father of that Jewish state.

But here, almost a century ago, a Zionist leader arrived with hundreds of other Jewish men to train for the newly formed Jewish

Legion, a fighting force of the British Army’s Royal Fusiliers created to liberate Palestine from Turkish rule during the First World War.

That man was David Ben-Gurion (born David Green), who would lead the struggle for an independent Jewish state and, in 1948, become Israel’s first prime minister. He would stay on in that role until 1953 and become prime minister again from 1961 to 1963.

“In Windsor, one of the great dreams of my life — to serve as a soldier in a Jewish Unit to fight for the liberation of the Land of Israel (as we always called Palestine) — became a reality,” Ben-Gurion wrote in a letter to Windsor’s mayor three years after he left the prime minister’s job.

“I will never forget Windsor where I received my first training as a soldier and where I became a corporal.”

It’s a chapter of world history lost to many.

“I doubt very much most Nova Scotians know about the Jewish Legion or the connection to Nova Scotia,” said Ken Hynes, curator of the Army Museum at the Halifax Citadel.

“It’s quite unique … to have someone (like) that to have been trained here in Nova Scotia, remember Nova Scotia and to have taken a very prominent place in world history.”

At the Army Museum, the story of Ben-Gurion and the Jewish Legion connection to Nova Scotia is prominently displayed in the First World War Centennial Exhibition, The Road to Vimy and Beyond.

“We wanted to tell the stories of some soldiers that have been forgotten. The story of the Jewish Legion is one that hasn’t received much attention, so we want to focus on that as much as we want to focus on the aboriginal soldiers’ story and the No. 2 Construction Battalion (mainly African-Canadians),” Hynes said.

An all-Jewish battalion of the British Army had long been talked about. But it wasn’t until 1917 that four Jewish battalions — the 38th, 39th, 40th and 42nd — became part of the Royal Fusiliers. Together, they were known as the Jewish Legion.

The 39th Battalion volunteers, mostly Americans, were sent to Fort Edward, starting in February 1918. The troops slept in tents on the hill in the summer and in makeshift barracks in winter.

The fort, initially used to train Canadian troops, became the training grounds for non-Canadians volunteering for the British Army after the Halifax Explosion damaged the Halifax Armouries.

From there, the troops would move on to England for more training before heading elsewhere in Europe or to the Middle East.

According to information provided by the Army Museum, Ben-Gurion arrived at Fort Edward in June 1918.

“I remember as a kid, somebody told me Ben-Gurion was here in Nova Scotia during World War 1, but I don’t think very many people knew that,” recalled Jon Goldberg, executive director of the Atlantic Jewish Council, a co-sponsor of the museum’s exhibit. “The guy who told me — I don’t even think he knew why he was here.”

But it’s important information that shouldn’t be lost to time, Goldberg said.

“It’s Canadian history. A story like this that happened during the war shows in the long term, over 100 years, there has been directly or indirectly a tie between Israel and Canada.”