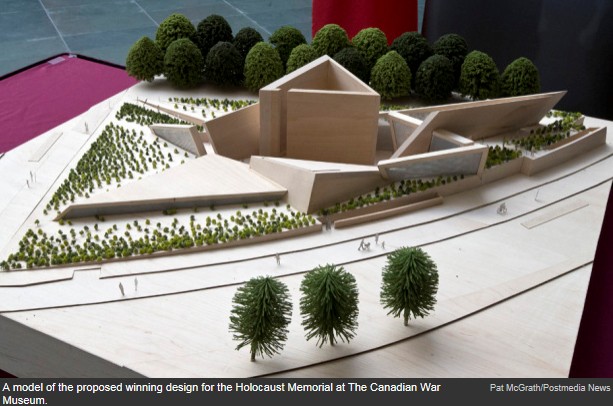 ~~There was no hesitation on Fran Sonshine’s part when she was asked by Foreign Affairs Minister John Baird to help raise money for Canada’s first Holocaust monument.

The cause is a personal one for Ms. Sonshine, the daughter of two survivors herself. “We grew up with it,” said the Toronto resident. “It’s now our turn to tell the story.”

It’s been nearly 70 years since the tragedy, during which about 11 million people were murdered.

But like Ms. Sonshine’s parents, many survivors have since passed on, withering away the direct link of today’s younger generation to those who experienced the atrocity.

“Unfortunately the time is ticking,” she said. “Our survivors are going. There’s less and less of them. The direct discussion and story telling is going to have to be done differently.”

The National Holocaust Monument will be the first of its kind in Canada, and will open in Ottawa in the fall of 2015.

“In every former allied nation in the western world, there is a Holocaust monument in the capital,” said Ms. Sonshine. “We’re the only ones who didn’t have one. That was a wrong that had to be righted.”

~~She said that she, along with four other private fundraisers, are on the cusp of their $4.5-million goal, which will see a $4-million boost from the federal government. Ms. Sonshine said corporations, banks and many private individuals have flocked to help fund the project, helping her raise $2.5-million alone so far.

The three-quarter acre project will incorporate six triangles, each representing identification symbols worn by Jews, Roma, homosexuals, Jehovah’s Witnesses and others during the war, together forming a Star of David. At the centre of the monument, formed by the six triangles, will be a gathering space for ceremonies that can fit upwards of 1,000 people.

The walls of the monument will be composed of both concrete and mesh, the latter representing the barbed wire in concentration camps, according to project manager Dov Goldstein. The concrete walls will feature photographs to be taken by Mr. Burtynsky later this year of actual concentration camps, as they exist today.

“It will tell a story of a specific time, one of the darkest chapters in human history,” said Mr. Goldstein, adding that visitors will be able to walk through the monument and learn from the inside rather than just by walking past.

“It will discuss the events that did happen, but just as importantly it tells a story of hope and survival,” he said. “We know this monument is for all Canadians. It’s not just for Jewish people or homosexuals or anyone else whose families were killed during the Holocaust.”

Approximately 40,000 survivors made Canada their home after the Holocaust ended in 1945.

The monument, to be located across the street from the Canadian War Museum, will feature a staircase from inside the centre of the star that allows guests to see Parliament Hill.

“To me, it’s really inspirational. The symbolism is into the darkness, out into the light,” said Ms. Sonshine, national chair of the Canadian Society for Yad Vashem. “These people came out of this mess and into Canada. There’s the hope in our wonderful country and Peace Tower.”