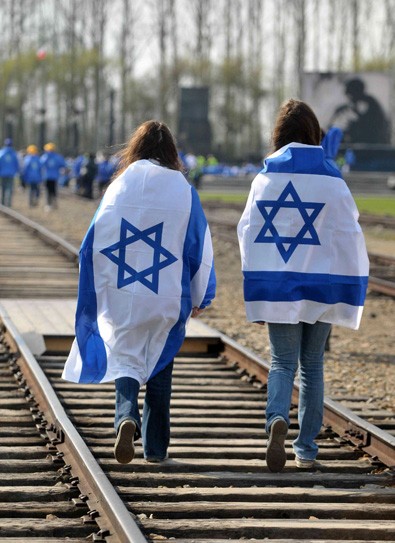 Thousands are expected together in last significant gathering of Auschwitz survivors in infamous camp.

January 21, 2015 (Toronto, ON) -- We are very proud to announce that the latest production of the March of the Living Digital Archives Project -- "Auschwitz-Birkenau: 70 Years After Liberation - A Warning to Future Generations", will be screened at a special commemoration ceremony on Parliament Hill, marking the 70th anniversary of the liberation of Auschwitz, which coincides with International Holocaust Remembrance Day, exactly 70 years to the day, on January 27th, 2015. Attendees will include the Honourable Jason Kenney, Minister for Multiculturalism, representatives from all political parties, national and international dignitaries and representatives from a number of Jewish and non-Jewish organizations from across the country.

In this short film, five Canadian survivors who have accompanied students on the March of the Living, along with a number of March of the Living leaders and students, reflect on the meaning of the 70th anniversary of the liberation of Auschwitz-Birkenau and on the educational importance of this anniversary to future generations.

This film can be viewed at:

The March of the Living Digital Archives Project was established in 2013 with the goal of gathering and digitizing survivor testimony and their interaction with students, that was filmed on March of the Living trips over the past 25 years.  Present-day digital recordings of survivors' testimonies are also being made so that their stories will continue to be told long after they are no longer able to share them in person. Material is being digitized, logged and archived and edited into mini-documentaries, all of which will be viewable online. It will prove to be an invaluable Holocaust education resource to educators, students, historians and the public at large.

"To be able to record the stories of Canadian Holocaust survivors in Poland - in the very places where they once lived vibrant Jewish lives, but then suffered the unimaginable horrors of the Holocaust, is not just an honour and privilege, it is our responsibility", stated Evan Zelikovitz, Chair of the March of the Living Digital Archives Project.  "The courage of these heroes to return to the concentration camps, their village ghettos, their hiding places, where their grandparents, parents, siblings and other family members were murdered, and then relive such horrors in order to teach our next generation, is simply remarkable.”

All materials produced as part of the Digital Archives Project are available to ALL Federations to share at any and all community events.  If your local federation - or any local community institutions - are hosting or sponsoring any ceremonies and events on January 27th, please consider screening this film.  Moreover, if you host or sponsor Holocaust education events at any time during the year, or in the future, the entire collection of films produced by the Digital Archives Project is a valuable resource that is at your disposal.

The March of the Living Digital Archives Project, including more than 30 short films and an official website will be rolled out in 2015 for all to see and use.   "And this is just the beginning", added Zelikovitz.  "We have 25 years of videos taken in Poland, so with proper funding, we hope to be able to create hundreds of films documenting the stories of our heroic Canadian survivors as a legacy to their courage and in honour of all those who lost their lives."

Videographers from the March of the Living Digital Archives Project will also be traveling to Poland with a number of Canadian survivors to attend the official ceremony at Auschwitz-Birkenau on January 27th, 2015, commemorating the liberation of Auschwitz.  The ceremony is organized by the Auschwitz-Birkenau State Museum, the USC Shoah Foundation & the World Jewish Congress. More than 3,000 guests are expected, including 300 survivors of the camps, royalty, dignitaries, politicians and heads of state.

The Digital Archives Project team will be shooting footage of the survivors at the ceremony, and will also travel with some of the survivors and their family members to their home villages in Poland.  A series of documentaries commemorating these important stories and experiences will be produced and archived for educational purposes for the next generation.

It is important to note that this will likely be the last time that Holocaust survivors will be able to personally attend a significant anniversary marking the liberation of Auschwitz-Birkenau.

Please feel free to contact Evan Zelikovitz at ezelikovitz@apcoworldwide.com or Eli Rubenstein at uiaeli@me.com for more information about the March of the Living Digital Archives Project.