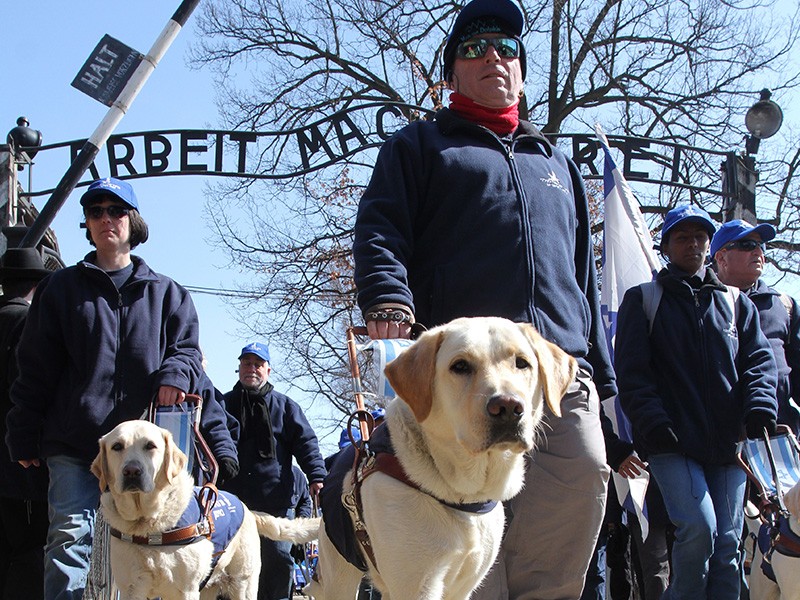 It’s amazing the impact a beloved animal can have on a person, even after 71 years.

Max Eisen remembers the last time he saw his dog, Farkas, as if it was yesterday. The image is seared in his memory, and you can still hear the emotion in his voice as her recounts the tale.

Eisen, along with 450 other Jews in the town of Moldava in what is today part of Slovakia, were being marched out of town on the first day of Passover, 1944, en route to Auschwitz. They had been removed from their homes the night before and already their former neighbours had moved into the homes of the departing Jews. They watched in silence as the group walked out of town. As they marched past his family’s property, Farkas recognized him and barked madly and wouldn’t stop.

“Farkas was the only human being in that town. There was no humanity in that town,” Eisen said.

It was a remarkable contrast to a time two years earlier when Eisen returned to his home after he and his father had been deported. Instead of being deported to a death camp, luck was with them and they were brought back from the brink. Something had changed the mind of the Horthy regime in Hungary, and so the Jews who were likely on their way to their deaths, were returned. Farkas greeted him with tail-wagging excitement and licks all over his face.

Viewing a film made during a recent March of the Living [MOL] trip to Nazi death camps, rekindled those memories. Eisen was particularly moved by a scene in which a guide dog for the blind licked the tears from the eyes of one of the Israeli participants. The woman had been on the ground, overcome with emotion by being in a room next to a gas chamber. Her dog, seeing her distress came over to comfort her. Sort of what Farkas did more than 70 years ago, said Eisen.

The film of which Eisen was speaking is titled Blind Love, a 28-minute documentary filmed during the 2013 MOL. March of the Living brings young Jews to Poland where they visit sites of Jewish life before the war as well as concentration camps where much of European Jewry were murdered. A contingent of Holocaust survivors accompanies the group, telling their personal stories and adding to the impact of the trip.

The 2013 MOL included six blind Israelis and their guide dogs. One of them, Tel Aviv lawyer Liron Artzi, was the woman who broke down in tears in Majdanek. Her dog, Petel, a mixed Labrador and Golden Retriever, provided comfort when she was in distress.

The inclusion of the blind Israelis came about as the result of a fortuitous set of circumstances. A few years ago, Eli Rubenstein paid a visit to the Israel Guide Dog Center for the Blind. Among the many hats that Rubenstein wears is one as president of the Canadian support group for the centre, so he wanted to see first hand the work done by that Israeli charity that matches guide dogs with blind people.

It turned out that the visually impaired Israelis he met were quite interested in one of his other community jobs, as national director of March of the Living Canada.

“Many told me they wanted to go on March of the Living,” Rubenstein said. “They feel part of the Jewish community and they want to be part of the teaching about the Holocaust.”

A film crew went along and they captured images of the visit that touched people on many levels, including the scene in Majdanek. It’s a powerful moment and it shows just how far we’ve come from the days when Nazis trained dogs to murder Jews, Rubenstein said.

“We understood the symbolism,” he continued. “The Nazis didn’t just murder Jews, they murdered people with disabilities. And the Nazis trained  German Shepherds to torture and kill prisoners.”

One scene shows survivor David Shentow recounting his arrival in Auschwitz in 1942. As the prisoners disembarked from the train, one man asked an SS guard if he could get a photo from his luggage. The guard ordered his dog on the man. The dog went for his throat, and killed him.

To illustrate the scene, the filmmaker used a vintage photo provided by Canadian Bill Glied. Glied is a survivor of Auschwitz who has been on MOL three times. He has seen the film and believes it packs a powerful message.

“It tells of the juxtaposition of the [guide] dogs against the dogs the Nazis had there.”

“The fact they took these six people to Auschwitz is an important and meaningful experience not only for them, but for all the people on the March,” he said.

The broadcast premiere of the film is set for Nov. 4 on the CBC Documentary Channel. It was also scheduled to be screened  at Congregation Habonim on Nov. 1, 8 p.m., during the 35th annual Holocaust Education Week. The screening co-sponsors are, Congregation Habonim, Toronto Jewish Film Festival, Sarah and Chaim Neuberger Holocaust Education Centre,  March of the Living Digital Archives Project and Canadian Friends of the Israel Guide Dog Centre for the Blind.