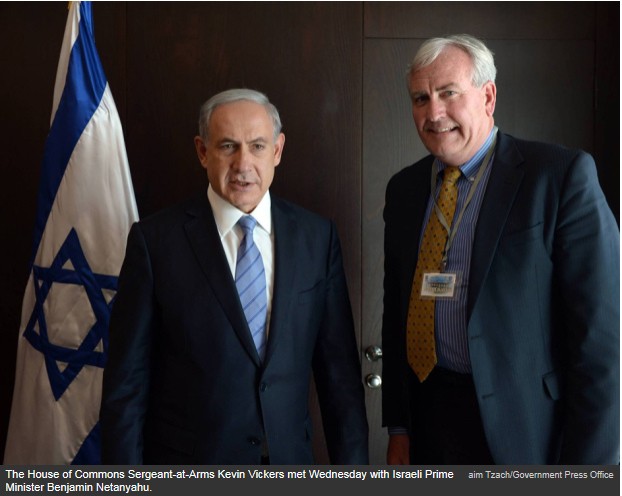 ‘This is not about me’: As Kevin Vickers honoured in Israel for actions protecting Parliament, he remains silent and stoic

Kevin Vickers went to Israel’s Parliament on Wednesday, where he was honoured for his heroics in the Canadian Parliament. The Sergeant-at-Arms conducted himself much as he had since he ended the attack on Ottawa exactly three weeks earlier.

There was a statement to the press, his first yet, but only a brief one. And it offered all accolades to his staff, deflecting all unseemly glory.

“Though I’m honoured to think [you’re] excited about me, I wish and hope you realize it’s about the entire team that performed very well on that day,” he said in a video that was subsequently circulated by Israeli officials.

‘‘This is not about me. This is about the team of Commons security services,’’ he added later.

Brian Lee Crowley, managing director of the Macdonald-Laurier Institute, said he can imagine what might have followed the same act of heroism in the United States.

“The next day, he’d be on Jay Leno and he’d have a book deal and some speakers’ bureau would be representing him and he’d be charging a good buck — I don’t mean to say that in a critical way, that’s just the American way,” said Mr. Crowley.

By comparison, Mr. Vickers has simply, politely, declined. He has accepted only as much praise as could be considered gentlemanly, and refused interview requests. He went to work the day after the attack, carrying the ceremonial mace, and in formation. He accepted the standing ovation of the House of Commons with dutiful forbearance, struggling to remain unmoved.

Not long after, though, in that same chamber, French President François Hollande made it clear in an address to Parliament of Mr. Vickers’ new standing: “I salute the courage of Kevin Vickers, who is known all across the world.”

Indeed, Mr. Vickers represents all the best qualities we hope to see in ourselves as a nation. He embodies the pinnacle of not only lethal competence, but also of stoicism and modesty. His efforts to deflect praise have only amplified it.

“I’m not sure [Mr. Vickers] has changed my impression of Canada overall,” admitted Josh Marshall, the editor and publisher of Talking Points Memo, a U.S. political web site that has decreed Mr. Vickers “Lord High Badass of Canada.”

“I think for us down here Canada has a more muted version of the [United Kingdom’s] mix of archaic costumes and vaguely medieval honorific titles and all that. Which is kind of quaint and a little odd to us. But this was an example of real steel under what can seem like foppery. Almost a bit Bond-like in the understatedness with which Vickers handled the whole thing … and then his all-business attitude after the fact.”

Mr. Vickers was in Israel Wednesday for an international security conference, a trip arranged prior to the attack and sponsored by the Centre for Israel and Jewish Affairs.

“This terror attack in Ottawa proves, once again, that Islamic radical terrorism has no limits and respects no borders,” said Israeli Prime Minister Benjamin Netanyahu after meeting the 58-year-old six-foot-three former RCMP officer.

The lesson to be learned from the Ottawa shooting, said Mr. Vickers, is that safety is community based.

“This is not an issue just for security, this is everybody’s issue and how we deal with this is by everybody, all the citizens, working together with their local police, their national police to ensure we have a safe society,” he said.

“I think that is accomplished by respecting the dignity of people.”

Mr. Vickers is widely believed to have shot the bullet that killed Michael Zehaf Bibeau, the troubled Muslim convert who murdered Cpl. Nathan Cirillo as the reservist stood guard at the National War Memorial.

Bibeau then raced to Parliament Hill where, according to reports, Mr. Vickers dived in front of Bibeau and opened fire with his 9mm handgun. Afterward, he walked into the Conservative caucus room and said “I put him down,” before returning to his office to reload his gun.

It prompted satirical TV host Stephen Colbert to recant his whole outlook on Canada: “To hell with Bruce Willis … Our neighbour to the north just put the ‘Eh’ in ‘Yippee-ki-yay motherf–ker.’”

Mr. Marshall juxtaposed Mr. Vicker’s effectiveness against that of the Secret Service: “This small black-suited army to protect the president with all sorts of crazy high tech gear and they can’t prevent some crazy guy from running into the White House.”

“He conforms to that Canadian stereotype of excessive modesty,” Mr. Moore said.

“I’m glad we have a public servant who does his job, even does it on the heroic scale that he did that morning, and then says ‘I’m just a servant of the people,” Mr. Moore said. The notion that Canadians as a whole are inherently so formidable is “probably only a story that we tell ourselves. But I’m glad to see it confirmed from time to time.”

Mr. Crowley suggested Mr. Vickers may in fact be more representative of his generation than of an overall Canadian identity.

“I’m not sure that somebody under 30 in Canada would have reacted the same way,” he said.

Young people today live in a system that teaches them to seek praise, he said. But that doesn’t mean there’s no hope. Certainly Mr. Vickers gives future Canadians a model.

“I heard a lot of children asked to dress up as Kevin Vickers for Halloween. There’s very much a sense that he is a hero for all Canadians. Children see in him someone to emulate,” Mr. Crowley said.