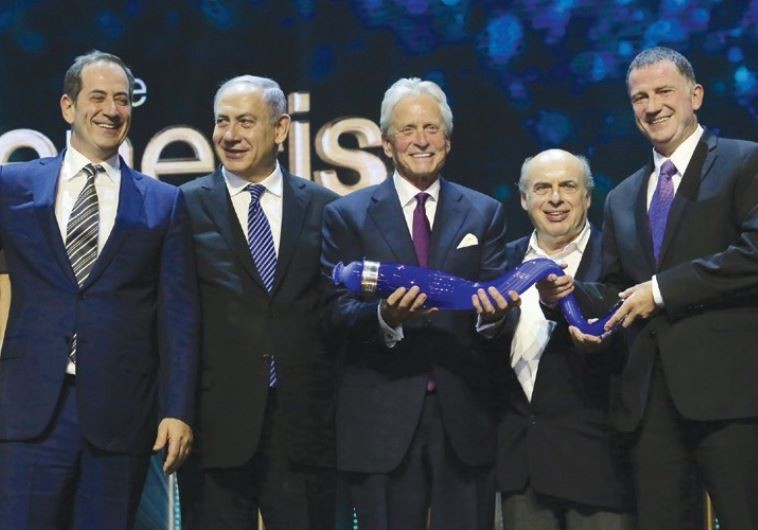 Jewish Federations of Canada – UIA is recipient of ‘Avenues to Jewish Engagement for Intermarried Couples and their Families’ grant through the Jewish Funders Network.

May 27, 2016 (Toronto, ON) Jewish Federations of Canada – UIA (JFC-UIA) is pleased to announce it has been selected to receive a grant from the Jewish Funders Network  ‘Avenues to Jewish Engagement for Intermarried Couples and their Families’, in honor of 2015 Genesis Prize Laureate Michael Douglas.

Jewish Federations of Canada – UIA and Canada Israel Experience will partner with Honeymoon Israel and the Jewish Funders Network to bring Honeymoon Israel’s program to Canada.

“We are very excited to have been awarded this grant and to partner with Honeymoon Israel and bring this innovative program to Canada. We believe that it will great way to engage young couples with Israel and to bring them closer to their local Jewish community,” said Linda Kislowicz, President  & CEO of JFC-UIA.

The program will bring groups of young intermarried and/or unaffiliated couples to Israel that want to build and enhance their personal connection to Israel and Judaism. It must be the first trip to Israel for at least one spouse. The long term objective of the program is to encourage ongoing meaningful involvement within local Jewish communities once they return home. Participants can focus on a community project, program or institution of their choice.

It will be managed and implemented by Canada Israel Experience - Canada’s exclusive organizer of Birthright Israel trips.  This innovative partnership between Canada Israel Experience and Honeymoon Israel will launch in Montreal in the spring of 2017. It will be offered in other communities at a later date. It is funded by Goodman Family Foundation with funds from the Avenues to Jewish Engagement for Intermarried Couples and their Families matching grant.

This initiative is among 28 projects from seven countries that were awarded the grant on May 22 at the Jerusalem Post Annual Conference in New York. The projects will result in $3.3 million in new funds being dedicated to this philanthropic area. Douglas lauded the innovation and potential impact of the funded projects, saying that they will make Jewish life more welcoming and accessible to intermarried families like his own.

“Today the Jewish world opened its doors a little wider,” said Andrés Spokoiny, President& CEO of the Jewish Funders Network . “And the impact goes beyond these grants. The gifts being matched, as well as the whole range of amazing projects that were submitted, represent new donors and newly increased levels of giving that this area has never seen before. And I believe many of these philanthropists, who were inspired by Michael and this matching grant to get involved, are likely to keep working on this issue over time. Each of the organization’s projects will run for up to two years, with JFN conducting periodic assessments of their success and impact.”

Jewish Federations of Canada – UIA represents ten Canadian Jewish federations and four regional councils. The organization and its agencies provide direct services to independent regional Jewish communities not served by an organized Jewish Federation. Organizational activities strengthen the connection and commitment of Canadian Jews both to one another and to Israel. Programs and services managed and operated by Jewish Federations of Canada – UIA focus on social services, strengthening Jewish community, building Jewish identity in the next generation, advocating for Israel and world Jewry and representing the interests of the national Jewish collective on both domestic and international stages. Canada Israel Experience (CIE) is a department of JFC-UIA. CIE programming strengthens Jewish identity and support for Israel and the Jewish people among youth and young adults by coordinating and leading unique Israel experience programs. As the leading Israel tour organizer in Canada, CIE ensures that all programs provide participants with an unparalleled Israel Experience.

About Avenues to Jewish Engagement for Intermarried Couples and their Families, in honor of 2015 Genesis Prize Laureate Michael Douglas

The Avenues to Jewish Engagement for Intermarried Couples and their Families matching grant began in 2015 when Michael Douglas, an Academy Award winning actor, peace activist, and supporter of Jewish causes and the State of Israel, won the Genesis Prize. In lieu of accepting the prize money, he redirected the funds to promote inclusion and diversity in Jewish life, which included a $200,000 gift to the Jewish student organization, Hillel International. The remainder of the award, combined with an additional $1 million gift from philanthropist Roman Abramovich, created a matching grant that was administered by the Jewish Funders Network, the global network organization for Jewish philanthropists.

The goal of Avenues to Jewish Engagement for Intermarried Couples and their Families was to mobilize the philanthropic community to increase the number of funders and grant dollars supporting organizations and projects that foster a culture of acceptance within the Jewish community. The particular focus of the grant program was to enhance opportunities for Jewish involvement available to intermarried Jews, their life partners and their children.

80 applications from 14 countries were submitted as part of the initiative. The 28 winning recipients span seven countries: the United States, Israel, Germany, Russia, Ukraine, Poland, and China.