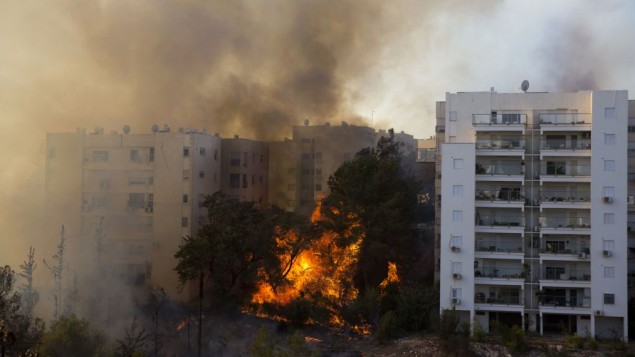 A picture taken on November 24, 2016 shows a bushfire raging in the northern Israeli port city of Haifa. Hundreds of Israelis fled their homes on the outskirts of the country's third city Haifa with others trapped inside as firefighters struggled to control raging bushfires, officials said. (AFP PHOTO / Jack GUEZ)

This week, firefighters have been struggling to contain huge blazes raging in a number of locations from the Galilee to the northern Negev, with the most major fires in the northern city of Haifa. High winds and dry conditions are contributing to the outbreak of over 200 blazes.  Thankfully no deaths or serious injuries have occurred. More than 100 people have been treated for fire-related injuries, mostly smoke inhalation. 80,000 Haifa residents have been evacuated.

The fires have consumed homes and businesses across the country. Greece, Russia, Cyprus and Turkey were among the nations that sent firefighting planes and other equipment to help fight the fire. 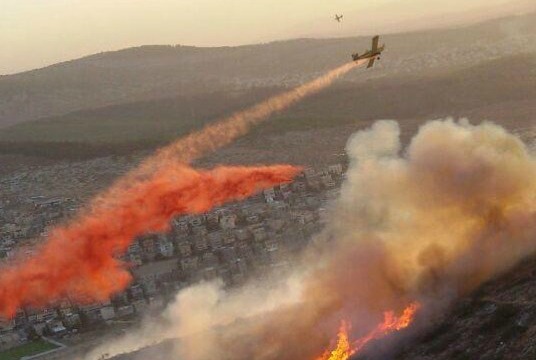 Israeli officials are increasingly convinced that arson is a likely cause in some of the fires. Several suspected arsonists have been arrested.

"There is no doubt that this is terror activity whose aim is to damage the State of Israel and the beautiful landscapes that it is building," Deputy Defense Minister Rabbi Eli Ben-Dahan told Arutz 7. "I have no doubt that we're talking about terror. They're lighting fires next to Jewish communities which are now in danger."

The impact on Israelis displaced by the fires will be long lasting. Once the flames are extinguished they will have to return to damaged homes, schools and neighbourhoods. Many homes and community institutions that provide vital programs and services will be uninhabitable for some time.

Jewish Federations of Canada - UIA, on behalf of the Canadian Jewish community, sends its support to those families and communities in the path of the fire. We hope for a swift end to the fires and the continued safety of all those affected. We will remain on alert and provide updates if the situation worsens.

We encourage you to send a message that can be shared with families impacted by this natural disaster. Words of support in critical situations like these are truly appreciated.

Email your message of support to info@jfcuia.org and we will forward it to our Israel office.