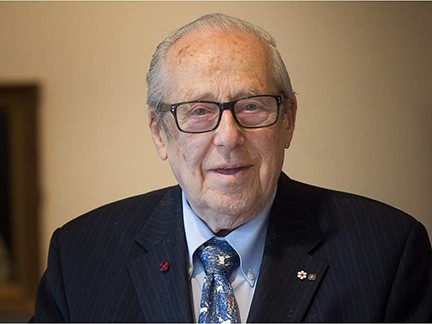 Dr. Victor Goldbloom spent his career championing political, interfaith and social dialogue. As the first Jewish Quebec cabinet minister, he served under Robert Bourassa as first ever minister of state responsible for quality of environment, minister of municipal affairs and minister of environment.

"Dr. Goldbloom was an example of what the finest could be. He was a mentor to so many of us that had the privilege of knowing him and working alongside him.  He was honourable and just and an exceptional human being.  We are all deeply saddened by his passing and we offer our condolences to his family. "
- Julia Berger Reitman, Chair, Jewish Federations of Canada - UIA

"I had the privilege of knowing Victor on a personal and professional level. From his early days as a practicing pediatrician to his days as a community leader, professional and volunteer. He was an inspirational man who had enormous capacity to build bridges between and among religious and ethnic groups. He was a true pioneer and leader who understood the importance of contributing to the larger community while never losing sight of the importance of his Jewish roots and identity."
- Linda Kislowicz, President & CEO, Jewish Federations of Canada - UIA

In 2012 Dr. Goldbloom received the Pontifical Equestrian Order of St. Sylvester Pope and Martyr from Pope Benedict XVI for his outstanding contribution to promoting Christian-Jewish dialogue and understandin