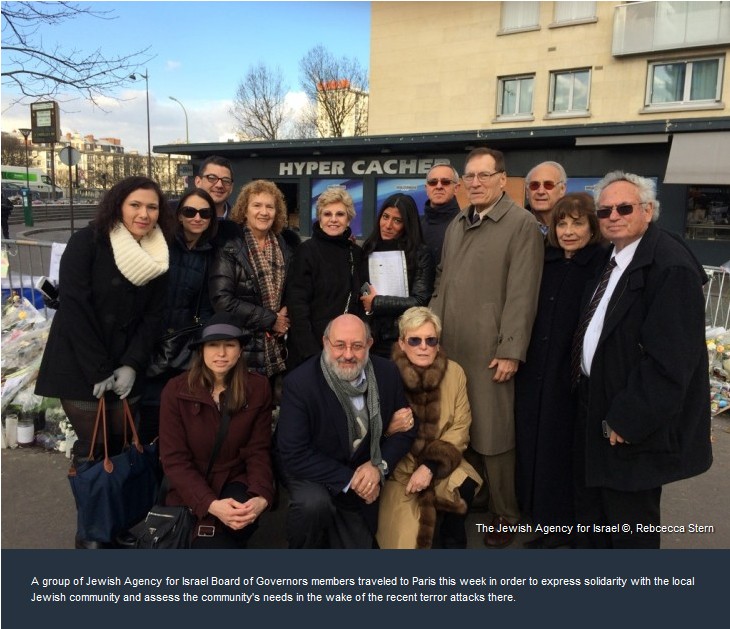 PARIS, FRANCE – A group of Jewish Agency for Israel Board of Governors members traveled to Paris this week in order to express solidarity with the local Jewish community and assess the community's needs in the wake of the recent terror attacks there. The Jewish Agency solidarity group, chaired by former Board of Governors Chair Carole Solomon, included Deputy Chairman of the Executive Rany Trainin, representatives from Jewish Federations across North America, and senior professionals from the Jewish Federations of North America, one of The Jewish Agency's primary partners.

While in Paris, the group met with leaders from the Conseil Représentatif des Institutions juives de France (CRIF, the umbrella of French Jewish organizations), the Consistoire (the representative body of French Jewry), and other Jewish organizations, as well as with Ambassador of Israel Yossi Gal and the local Jewish Agency delegation. The group also visited Hyper Cacher, the Paris kosher supermarket targeted in the deadly terror attack on January 9, and met with Sandra Charabi, a survivor of the attack.

Speaking to the group, community leaders praised The Jewish Agency's work in France and asked that it be expanded even further. "Masa is the strongest way to keep our young people connected to Israel and being Jewish," said Keren Hayesod France President Richard Prasquier, referring to Masa Israel Journey, a partnership between The Jewish Agency and the Government of Israel that brings thousands of Jewish young people from around the world to experience life in Israel each year.

Chairman of the Executive of The Jewish Agency Natan Sharansky accompanied Prime Minister Benjamin Netanyahu on his solidarity visit to Paris last month. Upon returning to Israel, he said: "The Jewish Agency is committed to helping the French Jewish community remain strong and secure. We embrace the families of the victims and the entire French Jewish community and we stand ready to serve any French Jew who wishes to make Aliyah and any who wishes to lead a robust Jewish life in the land of Israel."

More than 7,000 French Jews made Aliyah in 2014, well over double the 3,400 who immigrated to Israel in 2013 and triple the 1,900 who did so in 2012. Over the past year, The Jewish Agency has doubled the size of its delegation in France and of its French-speaking staff in Jerusalem in order to accommodate the heightened interest in Aliyah. Additionally, The Jewish Agency has expanded opportunities for young French Jews to experience Israel through programs such as Masa Israel Journey, Onward Israel, and Bac Bleu Blanc, a weeklong Israel experience program for French Jewish teenagers. The Jewish Agency's Emergency Assistance Fund, created after the terror attack at the Jewish school in Toulouse in 2012, provides financial assistance to French Jewish institutions in order to enable them to put security measures in place and allow Jewish life to continue despite current threats.