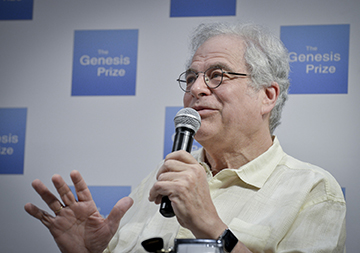 Photo: Israeli-American violinist Itzhak Perlman speaks at a press conference held before he received the 2016 Genesis Prize in Jerusalem on June 23. Credit: Flash90

As a community priding itself on thousands of years of continuity and tradition, the Jewish people now face the challenge of increasing secularization and intermarriage among the younger generation. Seeking to confront these trends, Israel’s annual Genesis Prize—which was recently awarded to Israeli-American violinist Itzhak Perlman in Jerusalem—is looking to the generation of more experienced Jewish leaders to serve as an example for their successors.

According Maxyne Finkelstein, chief of staff at the Genesis Prize Foundation, the prize seeks to give younger people a new way of looking at high-profile Jews and their commitment to the Jewish world.

“It’s created an opportunity for young people to see individuals who they admire, who we refer to as modern-day Jewish heroes, and understand the pride these individuals have in their Judaism and their connection with Israel, which may not be obvious to them on a day-to-day basis,” Finkelstein, formerly chief operating officer at the Birthright Israel Foundation and CEO of the Jewish Agency for Israel in North America, told JNS.org. “Our hope is they will now think about their own connections to Judaism, and their relationship to their own heritage, and understand that one can be successful in any field and still be a proud and active Jew.”

Founded in 2012 by the Israeli Prime Minister’s Office, the Genesis Philanthropy Group, and the Jewish Agency, the Genesis Prize—informally known as the “Jewish Nobel Prize—has previously been awarded to actor Michael Douglas and former New York City mayor Michael Bloomberg. The prize comes with a $1 million cash reward. Bloomberg’s 2015 prize money went towards the launching of the Genesis Generation Challenge competition.

“[The competition] was a call to young people asking them to think about ways to resolve significant problems in the world and to engage in social justice activities through a team process framed in the values of tikkun olam (repair of the world),” Finkelstein said. “It is very much along the lines of what Michael Bloomberg does through his foundation every day, trying to solve important problems within the world.”

Through the competition, nine teams of 10 individuals each were awarded grants of $100,000 to either begin to develop or continue an initiative they had already started. One example, shown in a video at this year’s June 23 Genesis Prize ceremony in Israel, is an application for a phone that allows users—who may not be able to use their hands—to dial the phone and use the elements of the phone with eye blinks, creating greater independence. Another example is a project relating to developing prosthetic limbs in Haiti for individuals who can’t afford to buy prosthetics; the prosthetics are created on a 3D printer. Also featured was an initiative to train people living in low-income housing in Toronto with skills to work as plumbers’ apprentices, and simultaneously, to encourage them to go green and change the fixtures in their buildings to save water.

In the second year of the Genesis Prize, Michael Douglas wanted the funds to go towards encouraging the welcoming of intermarried families into the Jewish community. A child of intermarried parents (including fellow actor Kirk Douglas) and intermarried himself, Douglas wanted these individuals not to feel left out. “He engaged in encouraging organizations to create new initiatives or expand initiatives for this population,” Finkelstein said. “This was done through the Jewish Funders Network with a matching grant.”

The Genesis Prize Foundation and Douglas’s efforts raised more than $3 million, which was spread across seven countries and 28 projects. Finkelstein said there was significant interest in the initiative and a lot of good feeling about being able to build in this field, which is of increasing importance due to the rising number of intermarried individuals in the Jewish community.

“There were several interesting and creative projects here, especially those directed at young couples and trying to find ways for greater engagement with families with young children, even reaching the stage of engaging grandparents from intermarried families who are an important part of the support system, and also helping families decide how to raise their children,” Finkelstein said.

Regarding this year’s Genesis Prize recipient, Perlman, prize foundation co-founder Stan Polovets said, “His story of overcoming extraordinary personal challenges to excel as one of the world’s great musicians and humanitarians is so reflective of the inherent strength of the Jewish character. He is an inspiration to all of us—both because of his refusal to give up and because of his commitment to give back.” Perlman contracted polio at age 4.

For the second year in a row, the proceeds of the Genesis Prize award were doubled to $2 million by a $1 million contribution from philanthropist Roman Abramovich. An additional $1 million will be raised through a matching funds program administered by the Jewish Funders Network, bringing the total amount of funding available to support Perlman’s philanthropic work to $3 million.

During a press conference held before the June 23 award ceremony, Perlman announced that the funding available through his prize would be used to support a series of initiatives in two key areas. Approximately 80 percent will be invested in projects to foster greater integration of people with disabilities into society in Israel and North America, particularly in Perlman’s hometown of New York City. The remaining 20 percent will be invested in developing advanced training for highly talented musicians in Israel in order to provide them with an opportunity to bring their talents to the world stage.

Moving forward, the Genesis Prize intends to continue its quest to amplify Jewish achievement and the inherent strength of the Jewish character—as Perlman put it, “making a meaningful difference in the lives of others.”