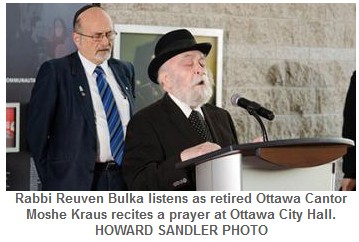 by Jordanna Tennebaum, Special to The CJN, Wednesday, January 28, 2015

OTTAWA — Leading dignitaries commemorated International Holocaust Remembrance Day on Jan. 27 at Ottawa City Hall, along with Holocaust survivors and more than 300 guests who gathered to observe the annual event, which this year coincided with the 70th anniversary of the liberation of the Auschwitz-Birkenau death camp.

Organizer Floralove Katz focused from the outset not only on remembering the horrors that transpired during the Shoah, but also on their enduring legacy. “Anti-Judaism has witnessed an unprecedented world growth spurt of about a 30 per cent increase in the past year,” Katz said.

B’nai Brith Canada CEO Michael Mostyn shared Katz’s sentiment, emphasizing the importance of remembering one of the darkest chapters in human history and noting the growing numbers of anti-Semitic incidents.

“A new and insidious form of hatred has taken root… Jews are once again being murdered simply for being Jewish. We saw this in Jerusalem, where four rabbis and a Druze policeman were butchered,” Mostyn said, referring to the November attack in the Israeli capital’s Har Nof neighbourhood.

Israeli Ambassador Rafael Barak connected those deaths with recent events in Paris in which four Jewish hostages were killed at a kosher supermarket.

“Ten years ago, the United Nations passed a resolution declaring Jan. 27 as the international day to commemorate the Holocaust… Seventy years after the liberation of Auschwitz, anti-Semitism has not disappeared from the streets of Europe,” Barak said.

In response to these and other attacks worldwide, Liberal Leader Justin Trudeau said Canada must work to implement the Ottawa Protocol to Combat Anti-Semitism, an international inter-parliamentary action plan signed in 2011 by the government of Canada. The document aims to eliminate anti-Semitic activity, which it views as an international threat to the Jewish People as a whole.

Federal Minister of Employment, Social Development and Multiculturalism Jason Kenney also reaffirmed a continued commitment to the Ottawa Protocol, as well as the need to remember the Holocaust.

“Elie Wiesel, the great chronicler of the Holocaust, wrote that, ‘For us, forgetting was never an option’… so today, we as Canadians join together with representatives of governments of all faiths to remember in this moral act,” Kenney said.

He reiterated the urgency of remembrance at a Parliament Hill assembly later in the day, where the March of the Living Digital Archives Project screened its latest production, titled Auschwitz-Birkenau: 70 Years After Liberation: A Warning to Future Generations. The short film incorporates the voices of students and five Canadian survivors who reflect on the 70th anniversary of the release of Jewish prisoners from Auschwitz-Birkenau.

“As time passes and as we mourn the passing of many members of the generation that witnessed and survived the Nazi era, it has become even more imperative for moral societies like ours to remain firm in that commitment to memory,” Kenney said.

He was joined by Canada’s Ambassador for Religious Freedom Andrew Bennett, British High Commissioner to Canada Howard Drake and Rabbi Reuven Bulka of Ottawa’s Congregation Machzikei Hadas. Together the guests listened to March of the Living participant, University of Ottawa student Jaclyn Friedlich, who vowed to preserve stories of the Holocaust for future generations.

“It is the responsibility of my generation to keep history alive and ensure that the hatred and intolerance that led to the atrocities of the Holocaust are never repeated,” Friedlich said.

The commemoration finished with a reciting of the Canadian and Israeli national anthems and a candlelighting service honouring the lives of all those who died during the Shoah.

The House of Commons also observed the commemoration as all parties participated in a moment of silence and issued statements marking Holocaust Remembrance Day and the 70th anniversary of the Auschwitz-Birkenau liberation.