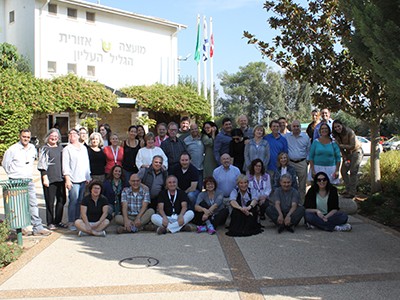 HALIFAX – Forty men and women, more than half Canadian, the remainder from Israel, surround the meeting table at a Halifax hotel, sharing, planning and continuing to build relationships between Canadian communities and Israel’s north.

“The partnership has been an opportunity for Canadians to make things better in the northern Galilee,” said Stephen Gaerber of Vancouver, Coast to Coast co-chair with Lior Rochman of Ayelet Hashachar, a kibbutz in northern Israel. “We meet with leaders from both countries twice a year, once in Canada and once in Israel, to decide where [Canadian-raised] dollars will go to help develop their region.”

Representatives from Vancouver, Edmonton, Calgary, Winnipeg, Ottawa and Atlantic Canada serve on Coast to Coast. In Halifax in mid-May, they met with mayors and laypeople from several northern Israeli communities.

The main areas of need identified by the Israelis were youth and education, and capacity building, leading to a better quality of life.

“Some of our biggest successes include investing in programs for youth at risk, enabling them to get an education and guidance, and placing them in leadership-development programs,” said Gaerber, a businessman who will complete his four-year term as Canadian co-chair in November. “We’ve also been instrumental in building a new medical school in the north.”

Ilan Orr, mayor of Yesod Hama’ala, a community of about 2,300, seven kilometres from the Lebanese border established in 1883 by the first pioneers who came to Israel, praises the group for the help his town has received to develop the medical school.

“I see us as pioneers, too. As a somewhat isolated region, we saw our level of health care could not compare to Tel Aviv, for example. Our life span in the north is less than in central Israel because of our health services. Before my time as mayor [he’s been in office 2-1/2 years after a career in government service], our northern leaders decided to improve health and academic services.

“The Partnership decided to invest in the med school, and today there is one in Zefat. As community leaders, we understand the benefits of working together as a region, rather than as individual communities, and have made major advances.”

He and Gaerber both highlighted the Gesher Chai program, which connects people in the two countries. Since 2000 (Coast to Coast started in 1997), 70 northern Galilean youths have attended the counsellor-in-training program at Camp Kadimah near Halifax. This year, four more will attend, along with younger campers.

“The benefit of having these children at Kadimah is great for our Canadian kids, who learn about another culture and are so willing to share theirs with the Israelis,” the camp’s executive director Phil David said.

Orr’s daughter, Shira, was at Kadimah in 2013, and he said her experience was marvelous. He has another child who could be there in a year or so.

Gaerber stressed how gratifying it is to see the successes that resulted from the over $1 million raised annually by the six Canadian centres, often from private donors, to support projects identified by the Israeli communities.

“Our meetings this week will help nail down projects to be taken on in the next year or so,” he said.

The longest-serving committee member, Binyamin Ben-Muchvar, mayor of Mevoot Ha’hermon, told the meeting, “You are my family. I will never forget how Atlantic Canada gave me $60,000 toward building a hydrotherapy pool [for children and adults with disabilities] and I was able to get 22 million shekels [$7 million Cdn], from government, and fundraising to complete it. When we meet next in Israel in November, you’ll see our new building and I can thank you all for it.”

He smiled and hinted, “We have a gym, but we need $400,000 Cdn for equipment. Maybe if you give us the beginning, the government will follow up.”