A smooth transition from veteran leadership to a new youthful outlook highlighted the 20th Atlantic Jewish Council’s biennial convention in Halifax Nov. 18 to 20.

More than 100 delegates and community members from across the region thanked Jon Goldberg for his 23 years of service as executive director, and words of encouragement were offered to Naomi Rosenfeld, who is ready to fill Jon’s very large shoes.

Rosenfeld is excited about the opportunity to lead the AJC. The Toronto-born woman spent several years at Camp Kadimah, the AJC’s summer camp 100 kilometres from Halifax, and then worked as Hillel director in the Atlantic region.

“One of my main focuses will be engaging young leaders. I know how to find them. They’re in my age bracket… and I think I know what they need from a Jewish community. They’re not necessarily keen on traditional, synagogue-based activities, but want to be part of a Jewish-focused community. “

AJC president Michael Argand, and many past presidents, will admit AJC’s programming has been Halifax-based, because of budgets and manpower. But Rosenfeld is determined to meet with leaders in Fredericton, Moncton, Saint John N.B., in St. John’s, Nfld., and in Prince Edward Island to engage the younger demographic in Jewish activities.

“There is an electronic webinar planned for the near future, Moishe House Without Walls, to enable Jewish young people to connect with micro communities within their own cities and towns, to find unaffiliated Jews across the region and hold mini-events such as Shabbat dinners, to start the engagement,” she said.

Argand is starting his third two-year term as president, but he has encouraged Rosenfeld to find a young leader ready to step to the fore and take his seat.

“We want to adjust to younger leadership,” said Argand in a post-convention interview. “Jon has been a mentor to Naomi in the transition period, supportive to her in everything she wants to do. We’re seeing some young people returning home to the region to build families and careers. If the economic opportunities are here, they’ll come back. We have a strong Hillel program, which is encouraging more participation than in previous years, and that engages our students. Hopefully we’re retaining some here.”

Several Sunday-morning discussion sessions preceded the AJC annual meeting. All focused on community building, such as the role of the synagogue in the community, the nature of children’s relationship with Israel, what happens after Hebrew school to keep youth connected, caring and programming for seniors, the challenges of sustaining Jewish communities in Atlantic Canada and the relationship between AJC and the regional communities. 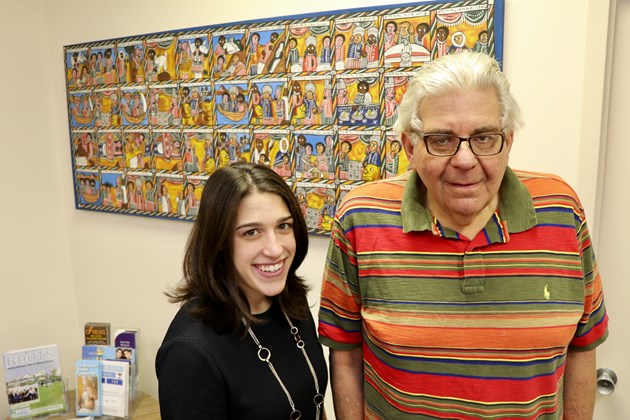 With Halifax by far the largest of the Atlantic communities, attention was paid to a $6-million bequest from late Halifax resident Abe Leventhal to assist in building a Jewish community centre that might, or might not, contain sanctuaries for the existing Orthodox and Conservative synagogues in the city. The terms of the estate dictate the building must be mostly completed within six years of Leventhal’s passing in March 2016.

Mark Rosen, chair of the Atlantic Jewish Foundation that oversees the bequest to the AJC, said for four years prior to Leventhal’s passing and bequest, a group from the two shuls tried to develop a combined building, with no success.

“We want to try to fulfil Abe’s desire to bring the community together, with separate religious observances, but in a community building. If we fail, so be it, but we have to try.”

Leventhal dictated that money from his estate, which would include the money designated for the building, should it not come to be, would go to academic scholarships for students at Atlantic post-secondary institutions and scholarships to Camp Kadimah.

Community leader and past AJC president Howard Conter stressed that people “must think forward [in the JCC process]. The parameters have changed in the last 40 years, from the old thought processes [of two synagogues and negativity between memberships]. We have to make a strong active thriving Jewish community here.”

Others emphasized the need for a younger element to take over and move forward. “Only with you has this a chance for success,” AJC past president Victor Goldberg told the meeting.

Goldberg was feted at a gala Shabbat dinner, attending by more than 200 people. Several speakers highlighted his career as executive director and praised his loyalty to the region, his love of Israel, devotion to and Zionism and his passion for defending all aspects of Judaism.

Community service awards were presented to Phil and Barbara Alberstat, of Halifax, Mindy and the late Borace Jacobson of Halifax, and Barrie and Evie Carnat, of Englishtown, Cape Breton, and formerly of Moncton and Prince Edward Island, for their long service to their respective communities.