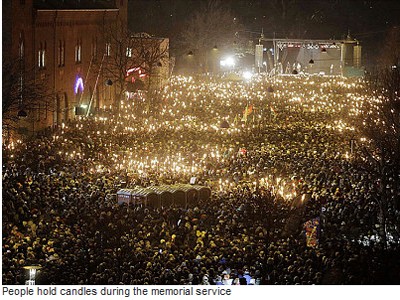 By David Chazan and Julian Isherwood in Copenhagen

Tens of thousands of Danes held torches and sang John Lennon’s Imagine at memorials across the country on Monday night to those killed by a suspected Islamist terrorist.

The prime minister, Helle Thorning-Schmidt, most Danish politicians and the leaders of other Scandinavian countries attended the remembrance ceremony in Copenhagen.

It was held near the cafe where a film-maker was killed in a burst of automatic weapons fire while attending a free speech debate on Saturday. Flags were at half-mast on all Danish public buildings on Monday.

"We have now experienced the fear that terrorism seeks to spread," the prime minister said, calling for national unity. “We know that there are fanatics who hold others’ right to live in contempt.”

The gunman, Omar el-Hussein, 22, a Dane of Palestinian descent, was killed by police hours after a second attack at 1am on Sunday on a synagogue where a girl’s Bat Mitzvah confirmation party was being held.

The attacker pretended to be a drunken guest to get past a police cordon, but was stopped by Dan Uzan, a Jewish economist standing outside as a volunteer security guard.

On Monday, two men were charged as the gunman's accomplices.

Uzan, 37, a six-foot-five former footballer and basketball player who worked at the Danish Treasury, paid for his quick thinking with his life. “If it hadn’t been for Dan, all those teenagers at the party could have been massacred,” said Michael Fish, his childhood friend.

The shootings - Denmark’s worst terror attack in decades - came two weeks after el-Hussein was released from prison, where he served two years for grievous bodily harm.

The two men facing charges of helping him obtain guns and hiding him in the hours between the two attacks were remanded in custody for 10 days, although prosecutors had asked for them to be held for four weeks.

Described as “young”, they denied the accusations at a closed court hearing. They have not been named.

Police, who say they are almost certain el-Hussein carried out the attacks, shot him after he opened fire on them outside his home. They traced him from CCTV footage that showed him abandoning his stolen getaway car after the café attack and boarding a taxi.

El-Hussein was “on the intelligence radar” as a potential threat but was not placed under round-the-clock surveillance because “he was not known to have travelled to Iraq or Syria” to fight or train with jihadist groups, Jens Madsen, Denmark’s head of security and intelligence, said.

Mr Madsen is facing questions about possible intelligence failures and the government has assured Danes that heightened security measures will remain in force.

Police are also investigating whether a jihadist network helped to plan the Copenhagen attacks. It was unclear how the gunman knew about the free speech debate at the café, where one of the participants was a Swedish cartoonist who had caricatured the Prophet Mohammed. The event had not been widely publicised.

There are also questions about how he became aware of the Bat Mitzvah party at the synagogue, where he arrived at one o’clock in the morning, and how he was trained to use automatic weapons which investigators said he fired proficiently.

Like the gunmen in Paris, he was a troubled teenager. Arrested twice for possession of cannabis, he failed to graduate from school and instead of university became mixed up with violent local gangs.

Classmates remember him as a “loner” with a fiery temper. “He loved discussing the Israeli-Palestinian conflict and often told us how he hated Jews,” one said.

He took up kickboxing and stabbed a 19-year-old man on an underground train in 2013. He evaded arrest but was captured two months later in connection with a burglary, Danish newspapers reported.

In prison, he became an Islamist radical, a “homegrown” extremist who came to hate the country where he was born and grew up.

Denmark, a nation of only 5.6 million people, has an estimated 600,000 immigrants or citizens of foreign descent, many of whom are Muslims. Hundreds of Danes are believed to have joined Islamist groups in Syria and Iraq.