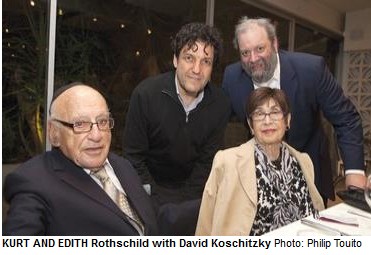 David Koschitzky will be succeeding Yohanna Arbib-Perugia as chairman of Keren Hayesod (United Israel Appeal) World Board of Trustees.

Koschitzky, a native of Calgary, Alberta, has been involved with Keren Hayesod for years and is involved in his local Jewish community.

“My short term plan is taking over for an amazing leader,” Koschitzky said of his predecessor, Arbib-Perugia. “I will have a lot of work following in her footsteps, not fill, but follow.”

Koschitzky described Arbib-Perugia as being a leader that comes around “once in a lifetime.”

He said she brought in “vibrance, personality and a Jewish persona to the job,” and that Keren Hayesod is lucky to have her be a part of the organization.

Additionally, Koschitzky has goals to reinforce the donor base and to continue to have an impact on the Jewish community.

“My long term goal is to make Keren Hayesod as important to the next generation as it is to the current one. Each generation has different needs,” Koschitzky said.

The announcement of the newly elected chairman was made on Tuesday, during the Keren Hayesod Annual World Conference – which began in Beersheba on Tuesday and is scheduled to come to a close in Tel Aviv on Friday.