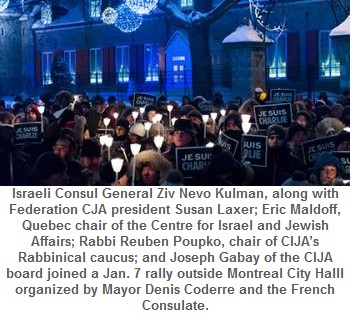 MONTREAL — “Tonight, I am Charlie, I am Jewish,” Montreal Mayor Denis Coderre declared at a community vigil for the 17 victims of terrorist attacks in Paris last week, held at Montreal’s Beth Israel Beth Aaron Congregation on the evening of Jan. 11.

That expression of solidarity with the four Jewish hostages who were killed in a kosher supermarket was also repeated by French Consul General Bruno Clerc and Aurelia Le Tareau, spokesperson for the Collectif Je Suis Charlie Montreal, which organized a march through downtown by an estimated 25,000 people earlier in the day.

The synagogue vigil, organized by Federation CJA, the Centre for Israel and Jewish Affairs (CIJA) and the Montreal Board of Rabbis, was attended by more than 500 people, under heavy security by both Montreal police and private guards.

The event was a commemoration of the victims, a show of solidarity with France, and an eloquent statement that terrorism must not prevail over democratic freedoms.

As Rabbi Reuben Poupko, who chaired the event, said, the tragedy in Paris is a reminder that Jews once again have been targeted and that the French Jewish community is living in fear. The four supermarket customers were murdered because they were Jews and were not random victims, he emphasized.

“It is obscene that in 2015, in a great capital of Europe, a city of enlightenment and culture… Jewish people, who have been there for generations and number half a million, are afraid…

“Our adversaries,” he continued, “must learn that strength means to listen to others ridicule your most precious beliefs and react with silence. That is the price of freedom.

“Those who come to our countries should know that the prosperity and peace they find is not coincidental. It is a product of our values.”

Federation president Susan Laxer said what happened in France makes it clear that the fight against terrorism is one for all who cherish democratic values.

Clerc and Le Tareau, a French citizen, both reiterated that it’s unacceptable Jews feel unsafe in France and that anti-Semitism cannot be tolerated. They agreed that the Hyper Cacher shoppers were taken hostage and “assassinated” (Le Tareau’s word) because they were Jewish.

“Without the Jews, France would no longer be France,” said Clerc.

Israeli Consul General Ziv Nevo Kulman, along with Rabbi Poupko, attended the massive solidarity march during the day, which started at Place des Arts and ended in front of the French consulate on McGill College Avenue.

Nevo Kulman said the world must take action quickly against the “hatred and fanaticism” that is spreading globally. “In order to fight terrorism, we have to strike at the roots, at these groups’ sources of funding, at countries that give them support.”

Coderre called for action on a local level and said he plans to convene a meeting of religious leaders in Montreal.

“We are all going to work together to protect our freedom… Those values are universal and everybody has a duty to protect them. We’re all part of the solution,” he said.

D’Arcy McGee MNA David Birnbaum, a parliamentary secretary to Premier Philippe Couillard, said the premier is in solidarity with the Jewish community in “unconditionally upholding freedom and security.”

Although what Charlie Hebdo published was “provocative, and often distasteful and outrageous,” its staff should not have feared for their lives, Birnbaum said.

It is “unspeakable stupidity,” not only “evil cowardice,” Birnbaum said, to think ideals can be killed.

Mount Royal MP Irwin Cotler, who was in Israel, sent a message that the world should not “sanitize” such attacks because that makes the next more likely.

What happened in Paris was felt in a very personal way by Marcelle and Armand Perez, even though they left France for Montreal in 1968. She still has two sisters living there that she had not been able to contact and was worried. She spent the day riveted to TV coverage.

“This is not the first time Jews have been attacked in France, but this was particularly sad. When you live in a democratic country, it is very hard to accept,” she said. “Now this is a conflict not only for Jews.”

“It always comes back to the Jews,” said Sarah Bauer, a native of Belgium, whose husband, Julien, is from France. “Maybe now the people of France will wake up.”

Elsewhere, CIJA urged the Jewish community in Canada to be calm and reassured that they’re under no heightened threat.

“We have been in regular contact with police in major cities, and there is no indication that security alert levels have increased,” said communications director Martin Sampson. “That said, we strongly encourage that existing security protocols be ensured… The police have stepped up their patrols around Jewish institutions.

“Take a deep breath. There is no need for panic, there is no intelligence to suggest we are at risk.”

In a statement, CIJA CEO Shimon Koffler Fogel said: “These acts of terror represent not only an attack on the people of France or the targeting of the French Jewish community. They constitute an assault on fundamental western and democratic values, as illustrated by the attack on Charlie Hebdo.

“That said, we are acutely aware that today [Jan. 9] the hostage crisis unfolded in part in a Jewish neighbourhood at a Jewish business. History records that whenever Jews are attacked, as they have been in France for years, it is a harbinger of attacks targeting the broader society.

“France must do all it can to rebuff that threat, and we must all stand together with France in that battle.”

“The fact that the attackers chose to target a kosher supermarket right before the Sabbath at its peak hours underscores the high levels of animosity towards France’s Jewish community,” said CEO Michael Mostyn. “French authorities must confront the threat of jihadist radicalization head-on and redouble efforts to stem the rising tide of anti-Semitism in the country.”

UJA Federation of Greater Toronto president and CEO Morris Zbar said: “As an organization with a long and unbreakable bond with the people of Israel, we know all too well the pain and emotional trauma that results from such senseless and cowardly terror attacks…

“As Jewish Canadians, we stand together with our brothers and sisters of France, and extend to all the victims of this week’s tragic events our deepest condolences, hopes and prayers.”

Montreal’s federation is spearheading an emergency fund to assist the French Jewish community. The most pressing need is safeguarding Jewish schools, synagogues and other institutions against further violence, and to provide immediate relief to victims of terror, Laxer and CEO Deborah Corber said in a letter to the community.

“We stand with our allies in defiance of those who commit such barbaric acts and whose only aim is to usurp the rights of freedom-loving people everywhere..."