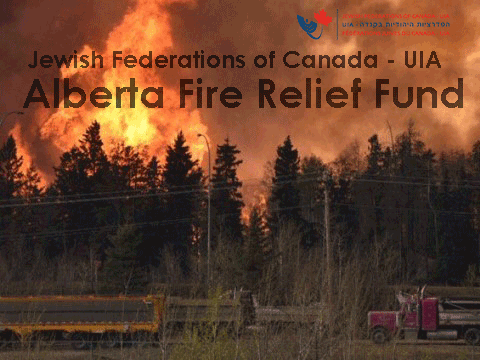 The Canadian Jewish community contributed over half a million dollars through the organized Federation system in support of victims of the recent Fort McMurray wildfires.

July 14, 2016 (Toronto, ON) Jewish Federations of Canada – UIA (JFC-UIA) is proud to announce that $500,000 was contributed by the Canadian Jewish community through the organized Federation system for victims of the recent Fort McMurray wildfires. Money was raised through individual donations, Federation and foundation allocations and leveraging the matching of funds through the Canadian Red Cross.

“The generosity of Canadians in response to the Fort Mac fires was awe-inspiring – and the generosity of Jewish Canadians was no exception. We are always overwhelmed by the way Canadians respond to emergencies and reach out to their fellow citizens of the world both financially and emotionally. We live in a generous, warm, principled country – and we are forever grateful for that – in times of emergency and every day.”

“The national response to the Alberta Fire Relief Fund brings to life the Jewish value of Tikkun Olam on which the Federation system is based. It is indicative of the unified nature of the Canadian Jewish community. In times of crisis, we come together in spirit and in action. As Chair of JFC-UIA, I am proud to represent a population that rises to the occasion so generously in response to the needs of fellow Canadians requiring emergency relief.”

Jewish Federations of Canada – UIA represents ten Canadian Jewish federations and four regional councils. The organization and its agencies provide direct services to independent regional Jewish communities not served by an organized Jewish Federation. Organizational activities strengthen the connection and commitment of Canadian Jews both to one another and to Israel. Programs and services managed and operated by Jewish Federations of Canada – UIA focus on social services, strengthening Jewish community, building Jewish identity in the next generation, advocating for Israel and world Jewry and representing the interests of the national Jewish collective on both domestic and international stages.  www.jewishcanada.org