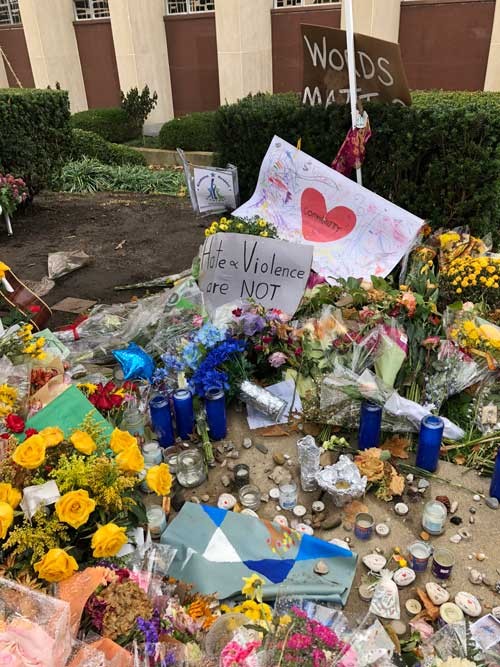 On November 13th, three weeks after the horrific attack at the Tree of Life, Nikki Holland, President & CEO of Jewish Federations of Canada - UIA and Adam Minsky, President & CEO of UJA Federation of Greater Toronto, joined Jewish leaders from across the continent in Pittsburgh, PA, including Warren Kimel, Vice-Chair of UJA Federation of Greater Toronto, for a day of briefings and an opportunity to stand in solidarity with the local community. The group which included national and local representatives from Jewish Federations, Jewish Community Centers and Jewish Family Services, discussed the tragedy, lessons learned and what it all means for Jewish communal life in the future.

The day began with a sober welcome from Meryl Ainsman, Chair of the Board of The Jewish Federation of Greater Pittsburgh. “We want to provide you all with the inspiration you need to do whatever you need to do in your cities to prepare for complete and utter devastation,” she said. “If you haven’t started thinking about it, please take my advice. Start now.”

“Here in Canada we began a discussion about our security needs, but we know there is a lot to learn from Pittsburgh,” said Nikki Holland.

Amanda Allen and Rebecca Elam, from the FBI’s Victims Services Division (VSD) spoke about how they helped Pittsburgh after the Tree of Life*Or L'Simcha building tragedy. In the event of a federal crime, the VSD brings operational, administrative and investigative services, they said. “Each crisis is different,” they explained. “The Boston marathon bombing, for example, is different from an attack at a concert or a synagogue shooting; and we bring specific expertise in each case,” they said. To be prepared you need a check list of things to do in an emergency that must be reviewed every 6 months.

According to 28-year FBI veteran Brad Orsini, who now works for the Jewish Federation of Greater Pittsburgh as the community security director, “Every community should have a local emergency response network, and Jewish Federations must be sure that they connect with their local emergency responders before a crisis.” In Pittsburgh Orsini connected the local crisis response teams that activated the network which included Red Cross volunteers who handed out water and food and trauma specialists to help anyone who needed it.

“If I have one message for Jewish Federations,” said Brad Orsini, “train at the highest. It’s prepare for the worst and hope for the best.” Just six weeks before the tragedy he had worked with the Rabbi and staff at the Tree of Life*Or L'Simcha Synagogue to provide active shooter training. This standard crisis preparedness is offered to all Jewish community organizations by SCN, the Jewish Federations of North America’s Secure Community Network. “There is no doubt the training preventing a worse horror,” he said. “People knew what to do.”

“This event has changed this community,” said Jeff Finkelstein, President and CEO of the Jewish Federation of Greater Pittsburgh. He credits the longstanding relationships he has developed with the leaders of both Jewish and non-Jewish groups as critically important components of their successful response. “These things don’t just happen,” he said. “They happened because we have all worked together for years; and when we pulled together we knew what we had to do for this community. Really, at the end of the day, it was about trust.”

“Listening to the FBI and local leaders from Pittsburgh made me think about our community preparedness and the respect and trust I have for our local Jewish communal leaders,” said Nikki holland “Though I pray that nothing like this will ever happen again I know that we are as prepared as we could ever be.”

More than a dozen people addressed the leadership group, discussing topics ranging from victims support to security to emergency response, and generally the focus was on community preparedness and relationships based on trust. There were also lots of thank you’s. Matthew Keller, Chair of the Board of Jewish Family and Community Services, echoed remarks by Brian Schriber, CEO of the Jewish Community Center, and others when he said, “Seeing the outpouring of support from you all is truly heartwarming. I just cannot thank all of you enough.”

The most moving part of the visit was a trip to visit to spot where the tragic incident occurred. An account of the diligent and spiritual work removing the victims’ remains offered by Chevra Cadesha, the local religious coroner, left people in tears. Outside a memorial included flowers cards and signs that read “Pittsbugh Strong.”

“Achdut is a word we have been using a lot around here. It’s the Hebrew word for unity. And that’s how we feel. Unified with each other and communities around the world,” said Finkelstein. “Yes, this was a horrible tragedy and we will never forget. But the story of Pittsburgh is one of strength. And we will be stronger moving forward. That I am sure.”

WATCH NEWS COVERAGE OF THE EVENT