by: Michael Lightstone
At the Atlantic Jewish Council's office in Halifax, 24-year-old Naomi Rosenfeld is the new executive director. The Toronto native succeeds Jon Goldberg, 70, who remains with the agency but intends to retire in December. A transition period has been in effect for weeks, to help the organization adjust to the change in leadership. 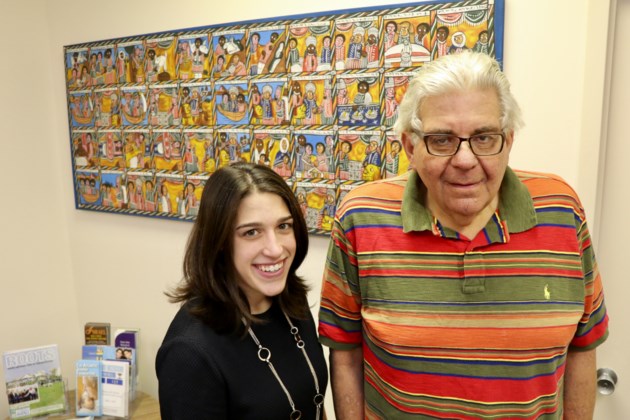 Naomi Rosenfeld, 24, has taken over as executive director of the Atlantic Jewish Council from retiring Jon Goldberg, who held the position for many years. (ERIC WYNNE / Local Xpress)

A granddaughter of Holocaust survivors, Naomi Rosenfeld grew up in a Jewish family in a big city that’s home to Canada’s largest Jewish community.

The expatriate Torontonian recently took over as executive director of the Atlantic Jewish Council, a small organization serving Jews in little and larger communities separated by vast geography, the sea and this region’s provincial borders.

It’s a changing of the guard at the council, headquartered in a nondescript office building in Halifax. Rosenfeld, 24, is replacing Haligonian Jon Goldberg.

She officially succeeded him on Oct. 1. Goldberg is still with the agency but plans to retire in December after about 24 years in the executive director’s chair.

A transition period has been in effect for weeks, Rosenfeld said.

“I’ve been learning as much as I can from Jon,” she said. “He’s really a wealth of knowledge and ... has been incredibly helpful.”

As it turns out, the transition was anything but quiet.

Rosenfeld's tenure began with a controversy that made national news. Her organization worked hard to defeat a resolution aimed at removing a pro-Israel campaign from a Halifax Pride event.

In the end, the motion was defeated by a majority vote in early October at Halifax Pride's annual general meeting, which attracted hundreds of new members representing both sides of the Israel-boycott issue.

Rosenfeld is quite familiar with this part of the country. She attended a Jewish summer camp in Nova Scotia for many years and has worked at the council’s office, overseeing the needs of Jewish students attending post-secondary schools in Halifax or elsewhere in the province.

Compared with other regions, such as the greater Montreal area, Southern Ontario and British Columbia’s Lower Mainland, Atlantic Canada is home to a small Jewish community. The biggest segment is in Nova Scotia, which has up to 700 Jewish households. (Most of those, around 550, are in the Halifax region.)

Goldberg, 70, is stepping down from a position he’s held since the early 1990s. Under his watch, the council, which was founded in 1975, promoted Holocaust education in Atlantic Canada, was watchful for local anti-Semitism, forged ties with Israel and helped Israeli immigrants settle here.

Bringing Jewish newcomers to the Atlantic region has been a practical way to deal with the Jewish community’s declining population, a situation caused by the deaths of community elders and out-migration of young people.

“I can’t think of more than 10 or 12 (Jewish) kids of college age who are still in Halifax,” said Goldberg, who was the public face of the Atlantic Jewish Council — at community events, in media interviews and at public gatherings remembering Holocaust survivors and the war dead from the Second World War.

Rosenfeld’s appointment means the organization will be led by someone with a fresh pair of eyes and a younger perspective: Goldberg’s an older member of the baby boom cohort, while his successor is part of the millennial generation.

She said she’s very optimistic “and positive about the future of this community. I think there’s tons of potential here for the Jewish community in Atlantic Canada.”

Rosenfeld said some of her objectives in the near future will be “to reach out to as many segments of the Jewish community as possible: young and old, observant and secular, newcomer and Atlantic Canadian-born, and try and ... see what are the community’s expectations and realizations for the Atlantic Jewish Council.”

Over the next few weeks, the council’s biennial convention will take place in Halifax, as will the Atlantic Jewish Film Festival (from Nov. 16 to 20). Rosenfeld said the festival, which is presented by the council and features movies about Jewish and Israeli culture, enables “people who don’t know about the Jewish community to come, to learn.”

A student profile published last year at Brandeis, where Rosenfeld earned her master’s in a dual-degree program preparing grad students for service in the Jewish non-profit sector, reported it was her father’s parents who survived the Nazi Holocaust in Europe.

It said she’s been to Poland for remembrance events, and has pushed for reforms in Holocaust education.

“Being the granddaughter of two Holocaust survivors has directly contributed to my motivation for becoming a Jewish professional,” Rosenfeld acknowledged in the Brandeis profile.

“It’s one of the best programs throughout North America,” said Rosenfeld. “But I think that being said, there’s always room for creativity and improvement and I’m excited to work with our volunteers and (the council’s community engagement director) Edna (Levine) to grow the program.”