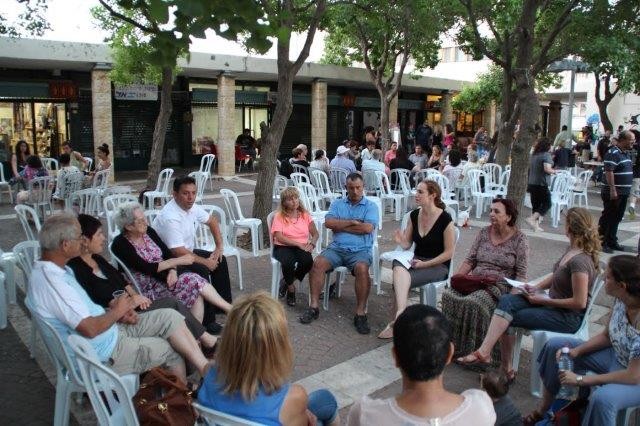 An education initiative in The Upper Galilee region of Israel is bringing a sense of unity and community to a ‘controversial and divided area’. Gracie Lofthouse meets the woman behind it

One of the defining features of Town Square Academia, in the remote Upper Galilee Region, is that it has no exams. All courses are free and there are no podiums for experts to lecture from. The most important thing is that every lesson taught here must be relevant to life outside the campus walls.

Founded by Dr Ayelet Shavit and Yael Silver, the initiative, a series of community courses spanning everything from history of art to eco-feminism, aims to test whether highbrow academia could have a real impact on people’s lives.

Shavit and Silver met with some criticism when they shared the project with university PR departments. “People kept telling us, you’re targeting people who don’t have the time or the leisure to spend on learning,” Shavit says. But she didn’t let that put her off, and the pair visited settlements and organisations across the region, asking people what they wanted to learn about. They didn’t expect the answer to be “quantum physics”.
women in leadership

Guardian Women in Leadership provides insight on gender diversity for progressive thinking organisations, as well as career advice and inspiration for senior women. Sign up now to become a member of Women in Leadership and receive exclusive benefits.

Nevertheless, Revolutions in Modern Physics proved a popular course. “People came from all over Upper Galilee,” Shavit says. Something became clear as the class got talking: the group wanted to understand nuclear power, a subject heavy on the minds of the Israeli population in the wake of the Iran nuclear deal. More specifically, they wanted to be able to pick apart news stories, to “see how information is used and abused.”

“Afterwards people said, ‘I’m not this helpless person who has to eat up what other people tell me.’”

The project, now in its third year, was born after a social justice movement hit Israel in the summer of 2011, with people protesting against the cost of living and the deterioration of public services. In Kiryat Shmona, where most of Town Square Academia’s courses are based, students and residents started thinking about those with power, and those without it, in their city. “There’s very little industry here, Tel Hai college is the biggest employer by far,” Shavit says. Professors took to the streets to give lectures, with students and residents joining in the debate. “It showed there’s a thirst for knowledge here,” with nowhere for debate to properly flourish.

So Shavit and Silver set out to provide the community with an outlet for discussion. Funded by Tel Hai College, MIGAL and Coast to Coast/Galilee Panhandle Partnership of the Federations of Canada – UIA, Town Square Academia puts on ten courses a year, taking place in cafes, community centres and factories. Three quarters of attendees are women, which Shavit puts down to the fact that they offer simultaneous courses for kids, so the women, many of whom are mothers, don’t feel guilty for attending. Plus, it “takes the children away from the TV.”

Courses often have two experts, one academic, one non-academic, both volunteers. At a course on leadership, local expert Leah Erlich described how she spoke up for a young woman who was abused and silenced by a man with connections to the local police force. The class then used Marxist theory to consider whether leadership comes from the individual or is more influenced by wider society. It’s a formula that many of the lessons stick to: start with people’s stories, then refer to relevant academic concepts, without veering too far from lived experiences. Conscious of the way that dense, theoretical texts can flag up social issues while, at the same time, eclipsing the voices of those most affected, Shavit wants to get the balance right between experience and theory. “I look at academia differently now,” she says. “I see how I’m part of an institution that brings knowledge and silences knowledge. Sometimes simultaneously.”

This is why it’s so important that the project brings about change in the community, Yael says. A course about the chemistry of water prompted locals to monitor the quality of the water next to their homes using rigorous, scientific methods. Another class came up with an educational model designed to improve the lives of children with ADHD. Sometimes it’s about inspiring people, or simply developing their curiosity, Ayelet says. The physics course, for example, ranged from learning about how GPS works to contemplating Schrodinger’s cat.

“It solidifies us as one community,” Town Square Academia student Orna Weinberg says. Orna never finished high school, but she doesn’t let that get in her way when it comes to approaching highbrow, theoretical topics. Silver says that The Upper Galilee, Israel’s northernmost region, is a “controversial and divided area”. The courses physically bring together diverse groups of people: religious and atheist, rich and poor. People from different settlements. People who’ve lived a mile away from the university their whole lives but have never set foot in it.

“One of the problems for me as an academic is that we talk with people who are similar to us,” Shavit says. “We don’t check our theories in an environment that’s different from where we were raised.” On a larger scale, it’s hard not to extrapolate the metaphor to Israel’s defences. “We are so busy putting up borders,” she says, gesturing around her. “It’s not that borders are wrong, but sticking to them permanently and thinking there’s no other way of looking at differences: that’s the problem.”