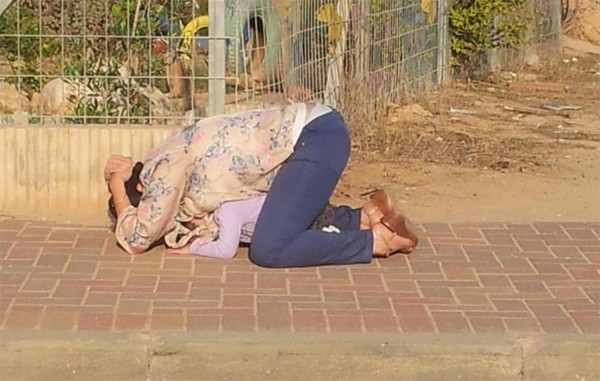 JFC-UIA continues to update you, following the burial of the three innocent teens yesterday, Israel is still going through challenging times.

Kassam rockets are targeted at Southern of Israel.
One picture can describe a 1,000 words… a mother protecting her own child yesterday on one of the streets in Sderot, having only less than 15 seconds to get to a sheltered place. 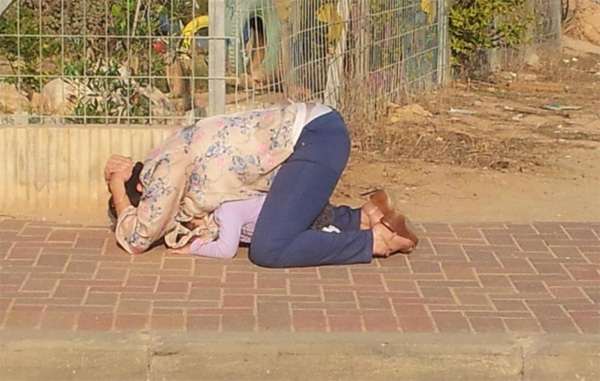 Below is a summary of today's events from Ynet:

The IAF responded quickly to seven mortars fired from Gaza Wednesday evening, striking rocket-launching terrorist cells in the southern Gaza Strip and continuing a general escalation in tensions since the bodies of three Israeli teenagers were discovered in the West Bank on Monday.

Two rockets were fired on Ashkelon after the IAF attack. One was shot down by the Iron Dome system and the other fell in an open area causing no damage. Another two rockets fell in open areas near Eshkol. Finally, a barrage of 8 rockets were fired at Ofakim and Sdot Negev. One was shot down, the rest fell in open territory and no injuries were reported.

The earlier mortar rounds were fired into the Eshkol Regional Council all striking in open territory. No injuries or damage was reported, but previous rockets over the last several days have struck cars and buildings including one factory in Sderot which burned to the ground after being hit.

The Israeli government has yet to agree to any specific military action in response to the murder of the teens and increasing rocket fire from Gaza after two inconclusive meetings of the security cabinet which lasted hours.

However, as tensions increase, so does the suspicion that officials are preparing for a wider military strike, most likely to be focused on Hamas in Gaza. IDF reservists reported receiving calls from the army to update their personal details including telephone number, address, and bank account numbers.

While these check-ups from the army are routinely conducted for most reservists every several months, calls made during the severe escalation in Israel has given rise to speculation that reserve forces could be called up for a ground operation.

Civilians, both Israel and Palestinian have also played a role in recent escalations including violent protests which erupted in Umm al-Fahm where protesters were met by 400 riot police.

Jewish protesters filled the streets of Jerusalem Tuesday yelling "death to Arabs" and calling on Prime Minister Benjamin Netanyahu to take revenge for the lives of the three Israeli teens.
Earlier Wednesday the body of an Arab teen from Jerusalem was found in a suspected revenge murder sparking Arab protests in East Jerusalem where police faced barrages of rocks and fireworks from the protesters.